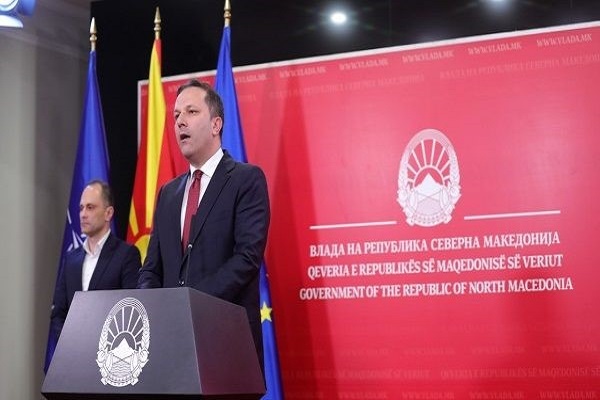 NEWS OF THE DAY: The Government has requested state of emergency to be declared in the country

“This is an emergency situation, hence the need for a state of emergency. The Government has no dilemma. We have made a decision to propose declaration of a state of emergency on the territory of the entire country. Now and immediately. The measures have given results, but now it is time for those measures to be intensified so as to prevent a coronavirus peak. We are convinced that we can prevent such an escalation by introducing a state of emergency”, said today the President of the Government, Oliver Spasovski, at a press conference.

In regards to the manner in which the emergency measures will be implemented, Spasovski pointed out – “This will not mean restrictions and bans on the movement of people. Such measures will be brought on a daily basis depending on the situation”.

He repeated that the citizens have to act responsibly and follow the recommendations of the Government.

“Nothing is the same anymore. Life has radically changed, in our country and in the world. Every one of us needs to be responsible and to behave responsibly. If we want to protect the nation, we must all behave both extraordinary and responsibly. We must rise to the task. We have prepared many measures, there are results and we will overcome the threat, together we will come out stronger”, said Spasovski.

The Prime Minister stressed that the state of emergency provides the Government conditions for swift and efficient implementation of the measures for prevention and protection of our country, society and economy.

“Only in a state of emergency the government will be able to act unhindered. Conditions are created for everyone who is participating in the fight against this virus to give their maximum”, stated Spasovski.

The proposal has been sent to Parliament Speaker Talat Xhaferi, who according the procedure is to convene the Parliament that is already dissolved. It is expected for the state of emergency to be declared this afternoon by President Stevo Pendarovski.

Minister of Health Venko Filipce at today’s press conference informed that 4 more people are infected with COVID-19, and that 30 more are being tested. The patients are in a stable condition and are monitored carefully.

The Government’s economic team, according to recent analyses of possible consequences due to the situation with the coronavirus and with the purpose of mitigating them, has adopted a set of measures for companies that are and will be most affected by the crisis. The measures were presented at a joint press conference by Mila Carovska, Minister of Economic Affairs and Coordination of Economic Sectors, Kresnik Bektesi, Minister of Economy, Nina Angelovska, Minister of Finance and Governor of National bank Anita Angelovska-Bezhoska.

“All of our partners and allies, all 29 NATO members have formally accepted the Republic of North Macedonia as the 30th member state. Yesterday, the Senate of the Kingdom of Spain, only for this purpose, for the first time in its history voted electronically, via a video conference, and ratified the Protocol. This act deserves congratulations and recognitions even in these days of serious and difficult challenges. This is great success for our generation, on behalf of all previous and future generations”, stated Spasovski.

“NATO membership closes an important chapter in the development of our country, an even with which the Republic of North Macedonia enters a new phase of its own development, a period of strengthened security and certain stability. NATO membership means belonging, sharing of values on which the Western civilization is based and appropriate inclusion of our country in these courses. These are values of freedom, democracy, justice and solidarity. Values that mean safe, stable and prosperous future. Congratulations on NATO membership”, said Osmani at the joint press conference.

“We have come to the end of a long journey in which many generations of politicians and citizens have participated. Not a single political idea in our independent state has survived as the idea for our NATO membership. Congratulations on joining the largest and most powerful military political alliance, congratulations for the patience, willingness and perseverance”, said Sekerinska.

The Minister also congratulated the members of the Army of the Republic of North Macedonia, but also NATO.

– This is success for our generation, but also for previous and future generations, said Spasovski and added that after the ratification was made yesterday in the Spanish Senate, the Spanish King also put his signature, and now the ratified instrument of Spain will be deposited in Washington, said the Minister of Foreign Affairs, Nikola Dimitrov, at the conference.

ELECTION CHRONICLE: Draft decision of the Government for postponing elections is being prepared

Regarding the legal aspect that has gathered legal experts, the President of the Parliament, Talat Xhaferi, at today’s address to the public explained that they had concluded that the preconditions for holding early parliamentary election based on the decision for dissolution of the parliament are impossible and unnecessary…

Spain tomorrow to deposit the ratification...