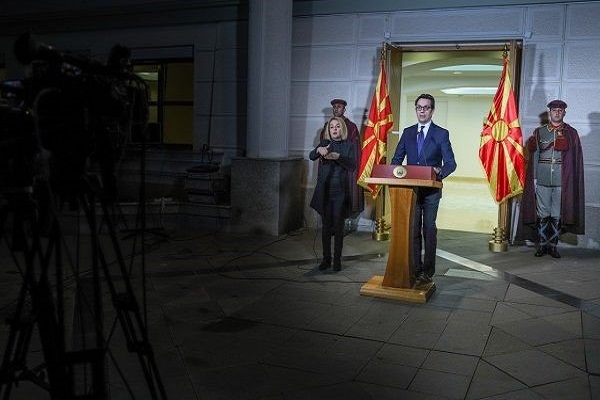 At an extraordinary press conference, President Stevo Pendarovski declared a state of emergency to last 30 days on the entire territory of the Republic of North Macedonia for protection of citizens against COVID-19.

Pendarovski emphasized that the Government will continue to function as a technical government and despite everything, this is an opportunity for political parties to show they can work together for the health of the people and to care about their political rating. With this decision, the elections scheduled for April 12 are cancelled, and as Pendarovski said, the early parliamentary elections will be scheduled when conditions for fair and democratic voting of citizens will be created.

Minister of Foreign Affairs Nikola Dimitrov urged for an urgent registration of Macedonian citizens stuck abroad due to the situation with the coronavirus.

As a response to the announced state of emergency, the National Bank tonight will inform that even after the state of emergency has been declared, the financial institutions for which it is a competent regulatory and supervisory body – banks, savings banks, exchange offices and legal entities for fast transfer of money, continue to work and to perform their key functions, with which their services will further be accessible.

The State Revenue Office will not take additional measures against taxpayers.

There are enough quantities of tests, close to 1.500 at the moment, and there is also an announcement for a donation of a thousand tests and our procurement for a thousand more that should be completed this week, stated Minister of Health Venko Filipce at today’s press conference. He also welcomed the decision of President Pendarovski for declaring a state of emergency.

“Out of 38 who have been tested, 7 persons have tested positive, 3 are from Debar and 4 from Skopje.

Today a total of 11 new cases of coronavirus have been registered. With this, the number of infected with the virus in our country until 9.00 pm is 42 persons. The condition of all patients is stable”, informed the Minister of Health, Venko Filipce.

“In a state of emergency, the state and society continue to function, while the rights and freedoms are not restricted automatically”, outlined Technical Prime Minister Oliver Spasovski on his Facebook Profile. He added that at the moment there is no decision for new restrictions on movement and performing of professional duties of citizens. Measures remain on the banning of all outdoor and indoor public gatherings, explained Spasovski, and controls will intensify on the implementation of these measures for the good of the citizens. The public will be timely informed on all additional measures of the Government.

Humanitarian aid has arrived in Debar, which is a donation of the Red Cross of the Republic of North Macedonia. The aid consists of food items, products for maintaining hygiene, blankets, mattresses, children’s, men’s and women’s clothes. It is stored in the warehouse of the Debar Red Cross Organization.

Basic Public Prosecutor’s Office Kavadarci today submitted proposals for a punishment order of seven persons, all from Kavadarci, who in separate cases have committed the criminal act – Not acting according to health regulations during an epidemic according to Article 206, paragraph 1 of the Criminal Code.