in WAR IN UKRAINE, WORLD

In the Russian region of Samara, a petition to publish names of mobilized soldiers who died after the shelling of Makeevka on the December 31, 2022, gathered 50,000 signatures. However, the army officials refused to publish the list, justifying it as a “military secret” that would damage the “special operation” (the invasion of Ukraine is called a “special operation” not “war” in Russia), reads the article in Globalvoices.org.

As the BBC reported, the Russian Ministry of Defense at first announced the death of 63 servicemen during shelling from the Ukrainian side. According to the Russian military department, the strike was carried out by six HIMARS rockets, two of which were intercepted by air defense.  The statement was made on January 2, 2022.  Afterwards, when the collapsed building where soldiers were stationed was searched by the rescue services, the ministry announced a total of 89 soldiers dead.

However, Ukrainian sources, as stated by the BBC, have counted Russian losses at a much bigger number: from 300 to 400 soldiers.

Russian Army representatives have claimed that the strike was due to “massive use of mobile phones by personnel in spite of the prohibition, in the reach of enemy weapons.”

Subsequently, Russian “military correspondents” wrote that the removal of rubble at the site of the strike continues — the vocational school building was almost completely destroyed — and noted that the number of victims could increase. They also criticized claims that the use of mobile phones was the cause of the strike and accused the Russian military leadership of trying to shift the blame onto the soldiers.

The governor of the Samara region, Dmitry Azarov, said on January 2 that, among the dead in Makeyevka were servicemen from his region.

Nevertheless, in a special (official, government related) group in VKontakte (a Russian state owned social media), relatives of drafted soldiers are writing that they still can not contact them and have not received any information about their fate.

On January 13, the governor of Samara’s press office posted: “The governor pays special attention to the issue of searching for Samara military personnel with whom their relatives cannot get in touch. The head of the region handed over to representatives of the Ministry of Defense the lists of Samara servicemen whose relatives turned to him for help in finding the fighters in order to clarify information on them.”  The post also said that the governor personally “called” wives and mothers to tell them that their relatives are not lost but cannot contact them because they are “with the military and not allowed to contact them.”

Many comments under the post, however, are from relatives who still, two weeks after the strike, are looking for their sons, brothers and fathers. 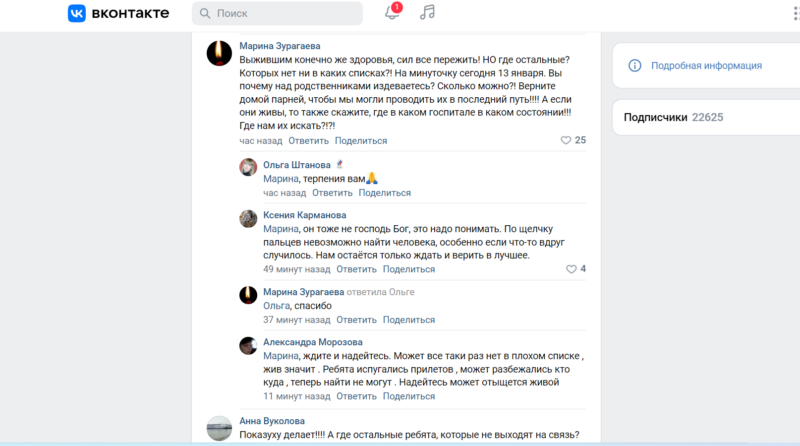 Of course, I wish health, strength to survivors! BUT where are the others? Those that are not in any lists?! Wait a minute, today is January 13. Why are you mocking the relatives? How can you?! Bring the boys home so we can take them on their last journey!!!! And if they are alive, then also tell me where, in what hospital, in what condition!!! Where can we find them?!?!

She was supported by user Kseniya

I fully support Elena! There is only silence, why don’t they let the survivors get in touch?!?! Why all this silence I do not understand!!! They take them [the drafted men] away, and it is a matter of two minutes, but when we want to find them, is not so!!!

Ekaterina posted a “cry for help” for a friend’s family:

CRY FOR HELP!!!Help me find a person 🙏‼
👉Maximum repost!!!
Kashtanov Semyon Sergeevich.
Date of birth 12/15/1992
Mobilized – draft September 24, 2022 44 regiment.
He was called up from the Krasnoyarsk military registration and enlistment office of the Samara region.
At the time of the tragedy, he was in Makiivka in the building of a vocational school. Further location is unknown.
Requests were made for January 13, 2023: Reception of the President, Reception of the Governor of the Samara Region, Ministry of Defense of the Russian Federation, Administration of the Samara Region and the Military Commissariat. Received a response – “INFORMATION MISSING”.
Perhaps he is in the hospital with memory loss or in a serious condition. Any information is important! 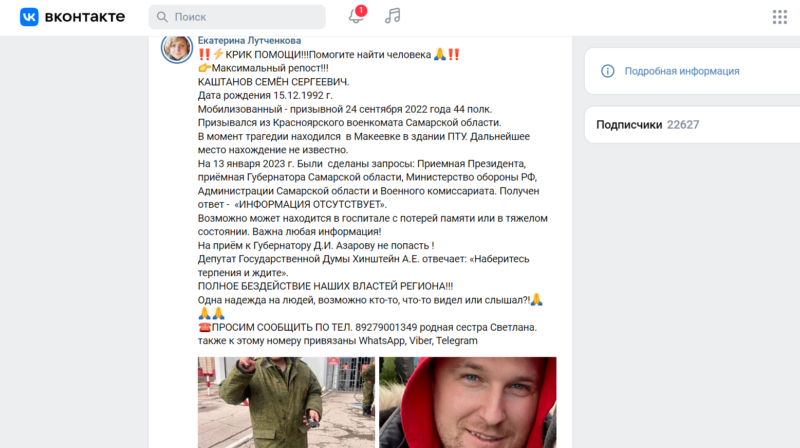 People further share in comments to various posts that DNA was taken from some relatives, but still no information as released to them about soldiers who were in Makeevka’s vocational school. Some suggest that they would never find them since the soldiers would be declared “missing without trace.”

All these comments are only a small part of those that were already deleted (VKontakte is heavily moderated). As another user, Tatiana, says under one of the posts:

[This is] Not a group, but a propaganda channel! ALL comments from yesterday have been deleted. Is it only possible to praise everyone here and listen to MO [Ministry of Defence] with an open mouth? Horrible 🤬

Meanwhile, as local Telegram media channel Protokol.Samara wrote, the first coffins from Makeevka arrived in the village of Mirny in the Samara region. According to the readers of Protokol, Samara, five coffins and one wounded man arrived in Mirny. All six were mobilized soldiers who were under fire in Makiivka.

The population of the Mirny village in 2021 was only seven thousand people.

Osmani completes his visit to Kyiv