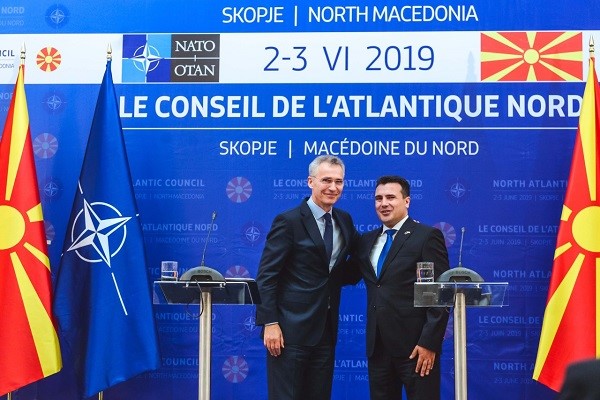 NATO Secretary General Jens Stoltenberg, in his address before the start of the talks on the process of the country’s accession in NATO, today said that North Macedonia’s membership in NATO is very important, not only for the country, but both for the entire region and the North Atlantic Alliance. The head of the Alliance recalled on the successfully resolved issue with Greece, adding that courage paid off and that improving security will also mean faster economic development for the country.

Prime Minister Zoran Zaev outlined that North Macedonia already has benefits from membership in the Alliance, specifying that an increase in foreign investments has been noted, an increase in salaries and a reduction in unemployment in the country.

State President Stevo Pendarovski, at the meeting with Stoltenberg and the North Atlantic Council, highlighted that the essential democratic progress and the implemented reforms focused on restoring the institutional and legal order in the country are valued, stressing the successful agreements with Greece and Bulgaria, the Prespa Agreement and the Good Neighbourly Relations Agreement with Bulgaria.

“As a state we remain committed to contributing to the preservation of global peace and stability, the fight against international terrorism, for which we are prepared in the following period to strengthen our participation in the peace operations under the leadership of NATO. For us, NATO membership is one of the greatest cohesion factors in our multi-ethnic society, and the support for the process has been continuously high for years, which obliges us as a state to continue with the reforms and as a full member of NATO”, stated Pendarovski.

“Death for damn Shqiptars” and a “Pure Macedonia” were the racist chanting with which the fans, but also a great part of the Macedonian citizens, celebrated the European Championship title of the “Vardar” Handball Club on the city square in Skopje. The celebration on the Macedonia square resulted also with an injured girl from the use of pyrotechnics.

The public and civic associations immediately reacted to the hate speech. CIVIL –Center for Freedomа condemned such cheering and celebration. CIVIL demanded from the institutions to react timely and not to allow another “celebration of hatred”! To take all measures, to investigate these cases and to urgently sanction the incitement of violence and spreading of inter-ethnic hatred.

“CIVIL mostly strongly condemns all forms of inciting violence, hate speech and causing inter-ethnic hatred. CIVIL will continue to follow the development of the events related to last night’s incidents. The impunity of these acts hast to stop forever!”, is said in their announcement.

The Ministry of Interior, on the other hand, through an announcement informed that it would take all necessary measures for securing public order and peace at the welcoming ceremony of the handball players, and that any attempt for causing an incident would be strictly sanctioned, as was done at last night’s celebration.

The Ministry urges the citizens not to use insulting slogans, chanting or singing of songs that spread hate speech, because it will be sanctioned, and for citizens to refrain from using pyrotechnic devices as everyone’s safety is endangered by this, as was the case with the girl that was injured yesterday from a pyrotechnic device.

Anti-corruption commission initiates misdemeanour charges against the Mayor of Negotino

The State Commission for Prevention of Corruption closed the case and did not initiate a further procedure in the case where the Mayor of Negotino, Toni Delkov, is accused of employing the wife of his first cousin.

The Basic Public Prosecutor’s Office filed criminal charges for unauthorized wiretapping and recording against a person from the Kicevo village Turin, who on Facebook presents himself as El Cheka and from Chicago is releasing recordings of wiretapped material. The Basic Prosecutor’s Office has requested from the competent authorities in the US to take legal actions in the direction of preventing further releasing of the recorded materials. The content of the criminal charges filed by the Ministry of Interior, Department for Cybercrime and Digital Forensics is against a person with a place of residence in the Kicevo village of Turin, but performs his criminal acts from Chicago, USA, where through his Facebook profile El Cheka is publishing recorded materials in an unauthorized way.

The state has good laws and strategies in the area of environmental protection, but lacks capacities to implement them, and this can be mostly felt when it comes to air quality, water protection, as well as waste management.  This is one of the conclusion related to the environment in the assessment of the progress of the Republic of North Macedonia that emerged from the Report of the European Commission for 2019, which was published last Wednesday.

In the recommendations of the EC regarding the environment and climate changes, it is said that our country has to apply the measures for improving air quality by ensuring cooperation and coordination between the governments at the state and local level, but also to provide sufficient funds for realization of these measures. Furthermore, it is recommended that Macedonia implements the adopted plans for waste management, and develops a National Energy and Climate Plan, in order to fulfil its obligations from the Paris Agreement and the EU 2030 Framework. In terms of air pollution, in the EC Report it is stated that the lack of administrative and financial resources seriously compromises the implementation of measures for air quality improvement.