MONITORING CIVIL demands maximum respect for the right to vote, the laws and democratic standards 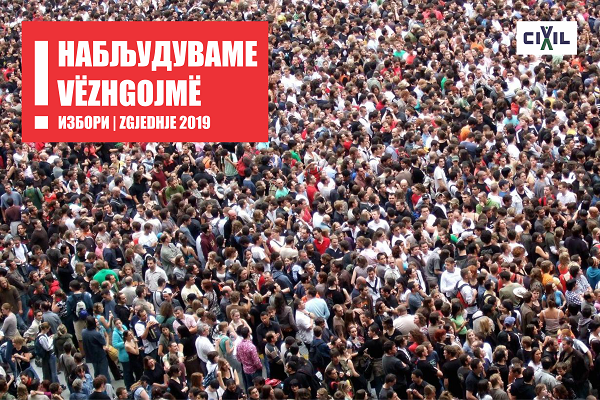 Ahead of the second round of presidential elections and election silence that begins at midnight between May 3 and 4, CIVIL – Center for Freedom urges all participants in the election process to maximally respect the democratic standards and legal regulations and to contribute to free, fair and democratic elections.

The right to vote is an inviolable human right and must be fully respected!

We demand from the political parties to respect the Electoral Code, the Constitution and the laws of the Republic of North Macedonia, to respect the election silence and stop any possible plans, if such exist, for vote buying, pressures and manipulations of voters.

Any attempt to disrupt the election silence and violation of the laws and standards related to the election process has to be immediately stopped and sanctioned. There must be no tolerance for any kind of pressure, threat or corruption (vote-buying).

We demand from the State Election Commission and we encourage it to maximally use all of its legal competencies and to carry out a legitimate, free, fair and democratic election process. The competencies of the SEC are high and it is at the top of the election process. The SEC does not have to wait for complaints and appeals, rather it can act according to its findings and opinion. We expect for it to do so at these elections.

We call on the citizens to vote freely, according to their own belief. They do not owe anyone anything. Everything that the parties and candidates promise them at any elections, actually belongs to them, according to the Constitution and the laws of the Republic of North Macedonia.

We call on all citizens who will not find themselves on the Voters Register, to report this to us. All they need to do is to leave us their name, last name and place of residence. Unfortunately, the SEC and other institutions did not find the time and manner to resolve this problem, but it is important that we have this information so that the problem can be solved as soon as possible, once and for all, after the elections.

We call on the media to be impartial and professional. Journalist have a great social responsibility in this period. We encourage them to be up to their task and to manifest maximum professional and moral responsibility. We are at their disposal for any problem they encounter.

We call on all citizens to report election irregularities of any type. Pressures, threats, blackmail, corruption, vote-buying, abuse of public resources or official position, violation of election silence, unlawful work of the election administration, propaganda, hate speech, false news, problems with the Voters Register, that is, citizens can report to CIVIL everything they consider not to be in accordance with their understanding of free, fair and democratic elections, Reports can be made round-the-clock, on the website Free elections, by email ([email protected]), Facebook message or by phone 02 / 5209 176, 070 734 044

CIVIL and CIVIL Media are raising their voice in...