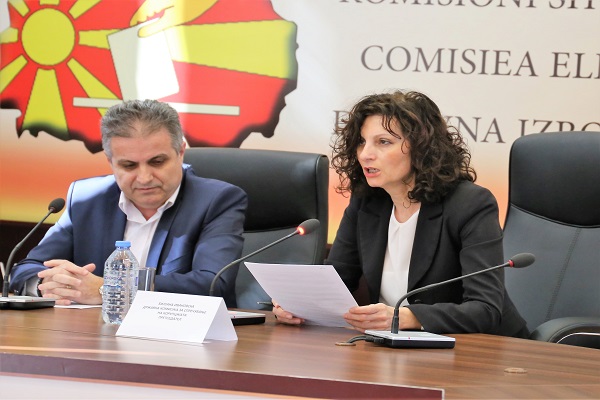 Returned laws to be re-voted on Wednesday

Parliamentary speaker Talat Xhaferi scheduled a session on Wednesday at which there will be voting for the second time for part of the laws that President Gjorge Ivanov didn’t sign, among which also the amendments to the Electoral Code.

However, it is uncertain whether Xhaferi plans to send them after that to the Official Gazette with one signature, because at the last briefing with journalists he announced that they would wait for the signature of the new president.

There is no answer as to why the session is scheduled for precisely Wednesday, although Xhaferi claimed that he would not be scheduling sessions while the election campaign is ongoing, even if there were an agreement on the SPO.

The indictment against those for whom the prosecutors consider they have evidence that they organized the events for April 27, will be ready by the end of May, claims the head of the Prosecutor’s Office for organized crime, Vilma Ruskoska.

Ruskoska believes that former ministers Janakieski and Ristoski, former parliamentary speaker Veljanoski and former head of UBK, Atanasovski and his colleague Nikola Boskoski, as well as former Prime Minister Nikola Gruevski, who Vilma doubts that she will see soon, are guilty for the April 27 incidents.

For the April 27 incidents, 16 people have already received a total prison sentence of 211 years.

In May there will be no enrolment of first-graders without having been vaccinated. Following yesterday’s proclamation of the measles epidemic throughout the country, the Minister of Health is categorical that in addition to kindergartens, unvaccinated children will not be admitted to schools as well.

However, on the other hand, the laws on mandatory immunization and primary school will not be changing, for which Minister Venko Filipce refers to the experiences of the Constitutional Court.

“Not a single child will be admitted to kindergarten or school if it is unvaccinated. We also found decisions of the Constitutional Court, which previously had decided upon complaints submitted by parents in 2014 and 2015. The decisions of the Constitutional Court are clear in that no one has the right to endanger public health, nor has the right with their own will to endanger the right of the child to be healthy”, says Filipce.

CIVIL reminds that the education in the Republic of North Macedonia is a constitutional category and that the Ministry of Health needs to find appropriate measures for dealing with the measles epidemic instead of violating the Constitution and the laws.

CIVIL – Center for Freedom most strongly condemns the hate speech that is intensely present in part of the election campaigning and in the public communication in the electoral context. Once more, CIVIL calls on the institutions, primarily, the State Election Commission and the Prosecutor’s Office, as well as the media and the entire Macedonian public to strongly condemn and reject all forms and expressions of hate speech in the public appearances of individuals and groups in the country. The organization reminds that the road from hate speech to hate crimes is short and that the consequences are unimaginable.

The SEC will be checking the disputed application of SDSM

The State Election Commission will review the materials that were submitted to them today from the headquarters of presidential candidate Gordana Siljanovska Davkova in relation to the application they claim SDSM activists used with the purpose to collect personal data from citizens.

The President of the SEC, Oliver Derkoski, says that upon receiving the materials they will be reviewed, and if it is determined that the Election Commission is competent, then appropriate measures will be taken, if not, they will be handed over to the competent institutions.

At yesterday’s rally of Stevo Pendaroski in Gostivar, a citizen revolted by the State Election Commission said that he would go to them with a gun because they had deleted him from the Voters Register. Regardless in which manner and with what kind of seriousness the threat was made, CIVIL condemns such vocabulary and expects for the organizers to do the same.

As a response to the citizen, this morning the President of the SEC, Oliver Derkoski, wrote on his Facebook profile: “Good morning from the SEC (we are waiting for the guy with the gun who was told to come to us), as the neighbours would say: what can you say!”

The visits themselves are logical, because the goal is to support fellow party member Hekuran Duka as one of the candidates for mayor of the municipality of Debar, and especially because they do not happen during working hours.

What is indicative are the addresses of the ministers during the meetings and their promises before the citizens, namely, their speeches from the position of ministers, and not fellow party members of Duka.

Deputy Prime Minister Bujar Osmani, at a meeting with the citizens had stressed that the entire government would stand behind candidate Hekuran Duka and would support his projects. This action of Osmani is not only a serious abuse of official position, but also represents interference of competencies of the central government in the local government.

Minister of Education, Arber Ademi, did not lag behind his colleagues and fellow party members, promising the citizens of Debar that if Duka were to become mayor of the municipality, that he personally would advocate for the progress of education in Debar.

Just to remind, abuse of official position is any act of an official with which they use their authorizations, overstep or do not perform their official duty in order to gain some benefit.

In an electoral context, abuse of official position means taking advantage of the position of an official for election purposes. One more chapter in the Criminal Code, Chapter 16 – Criminal acts against elections and voting also refers to such abuses. Such abuse of official position usually is related to carrying out pressure or attempting to conduct pressure over employees in the public and state administration, in other institutions or institutes financed from the state budget, the budgets of the municipalities, as well as in trade companies and enterprises with state capital.

The promises of DUI’s ministers expressed at the meetings in Debar are part of the work of the Government that it is obliged to implement, regardless of who the citizens of Debar will elect as mayor at the upcoming early local elections in the municipality.

The State Commission for Prevention of Corruption accepted the complaint of VMRO-DPMNE against the Agency for financial support, which during the election period had paid 1.250.000 euros to more than 2.000 winegrowers, though not for subsidies and regular payments, but for paying debts of private companies.

The Commission for Prevention of Corruption at today’s session, upon its own initiative, brought a decision to open a procedure in relation to the payment of subsidies for tobacco by the Ministry of Agriculture and Water Economy.

In regards to the violation of the Electoral Code and the Law on Prevention of Corruption and Conflict of Interests, the State Election Commission will initiate misdemeanour procedures for the Mayor of the Municipality of Gazi Baba, Boris Georgievski, for concluding an agreement with the Agency for securing people and property, in the amount of four million denars, for physical and patrol security of 11 primary schools and two kindergartens

Furthermore, a misdemeanour procedure has been initiated also against the Mayor of Stip in relation to distribution of firewood to four socially endangered families.

“If tomorrow I were in power and stole people’s money, like they did, then the say should go for me too: To go to jail”, said presidential candidate Stevo Pendarovski last night in Gostivar. He added that those who stole money, will return the money and will go to jail.

But who has returned any of the money until now and gone to prison? There are trials, house arrests as well, but they are all released, postponed, they flee…Former Prime Minister Nikola Gruevski, for whom SDSM used to say and still says stole the most, managed to flee…and it is still not known how he did it”, is said in today’s election chronicle – Empty promises, hypocrisy, guns, ethnic and gender stunts…

CIVIL: Freedom of reporting must not be...