Categories
Home Newsroom Parliament constitutes, Zaev will be reducing administration and number of ministers, Mickoski with hope to form government…

DAILY BRIEF Parliament constitutes, Zaev will be reducing administration and number of ministers, Mickoski with hope to form government… 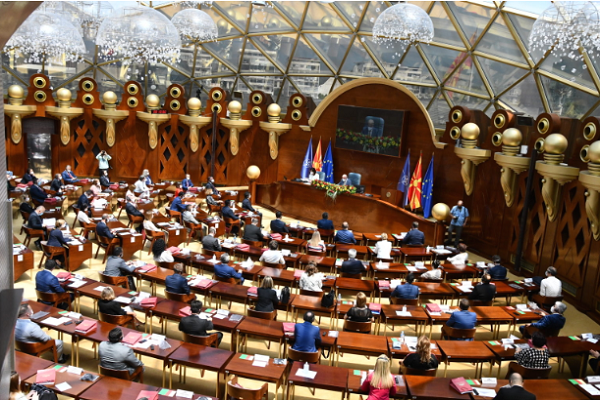 The parliament at today’s constitutive session, upon the proposal of the Verification Committee, verified the mandates of the 120 MPs of the tenth parliamentary composition elected in the early parliamentary elections held on July 15.

Jagoda Shahpaska, Chairperson of the Verification Committee, who was elected today by the Parliament at the first constitutive session, said that the Committee concluded that there are no grounds for disputing the election of the 120 MPs.

Zoran Zaev: Reduction of the administration, the number of ministers and rationalization of public services

The future factors in the new government will need to be prepared for a serious reform of the public administration as well – we are talking about a change that will bring efficient service to the needs of the citizens, but also a change with which the size of the administration will be reduced by 20%. We are talking about a smaller number of ministers and about rationalization of the public services, but with greater number and quicker services for citizens. INTERVIEW: Najcevska: As a result of the current composition of the Parliament, there will be a government that will be part of the party negotiations

VMRO-DPMNE leader Hristijan Mickoski stated that the past elections have been the worst of all in the past 30 years, but expects for VMRO-DPMNE in the following days to try to secure a parliamentary majority.

MP Jagoda Shahpanska with 115 votes FOR, has been elected chairperson of the Verification Committee of the Parliament.

The Ministry of Labor and Social Policy informs that the payment of the financial rights from social and child protection for the month of July is in progress.

In the Veles Court, the trial for the former President of the Criminal Court in Skopje, Vladimir Pancevski, continued today.

The extraordinary supervision of the AZLP in the SEC determined several violations to the regulations for personal data protection.

Arsovski: I expect for the new government to be unstable and uncomfortable in the mandate to implement essential reforms

Dudush: The illegal landfills are history in Shuto Orizari