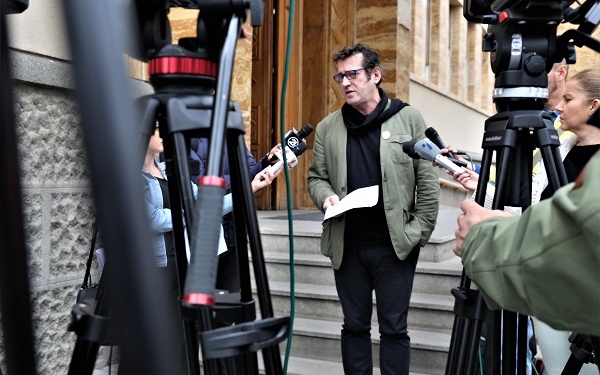 What grew from a CIVIL announcement into an #End Profligacy Initiative that was supported by thousands of citizens exactly one year ago, on May 17, 2019, was incorporated into demands that the Organization submitted to the Parliament.

“The appanages, pensions and other privileges and benefits that former, but also current, officials have, cost millions of euros. This simply has to stop immediately!” – stated Xhabir Deralla, President of CIVIL, in front of the official entrance of Parliament, on the occasion of submitting the text of the Initiative to the institution.

“Today we are going to submit a demand, which has resonated strongly with the public, and which concerns the privileges and benefits of both current and former officials, elected and appointed. And we will expect a reaction from the parliamentarians. It is in this house that these problems have been made, it is in this house that these systems for exhausting citizens’ resources have been built, and we expect, or more precisely, we categorically demand for these injustices to be corrected!”, stated Deralla, announcing the Organization’s position.

The #EndProfligacy Initiative is about cancellation of privileges of former and current officials.

“Perhaps one might think that the occasion for this address of ours in front of Parliament is the assumed pension of the former President of the Republic of North Macedonia. Yes, perhaps that was the occasion, but we have long ago, very long ago spoken that privileges, benefits and profligacy at any government level have to stop. This implies that this Parliament needs to revise the legal provisions that give them enormous benefits and also to abolish a large part of them, and of course, to do this in the most urgent possible procedure.

In a welfare state as is the Republic of North Macedonia, according to the Constitution, we must no longer allow not even one denar to be spent pointlessly, because someone here, in this Parliament has decided to give huge benefits both to current officials and to those whose mandate has ended”, said the President of CIVIL, Xhabir Deralla, just before a representative of the Organization submitted the text of the Initiative to the parliamentary services on May 17.

Several politicians, among which also President Stevo Pendarovski, gave their support immediately and in the days after the initiative was launched. On June 5, CIVIL also organized the panel discussion “End Profligacy”, where interested citizens had the opportunity to learn about CIVIL’s demands regarding the reduction or cancellation of the privileges of public officials. Later, a working group emerged from this panel discussion, which turned this initiative into an online version that by the end of September was signed by over 6,000 citizens.

These citizens supported the initiative for the cancellation of appanages at any level for any position; cancelling of life-long pensions for former presidents, up to the moment they fulfil conditions for retirement, according to the incomes they had during their work service; cancelling of money and other compensations for all managing boards, that is, the position in these and similar bodies should be honorary, and not a paid one; cancelling or merging of state agencies, with a reduction in the number of employees; cancelling of all privileges related to the use of official vehicles, representations, security for officials and other overly expensive privileges; drastic reduction of travel costs of officials, more specifically, providing funds in the amount of the price of public transportation; establishing a practice of banning procurement of medium and high class official vehicles; cancelling discretionary powers of officials… These are some of the demands that CIVIL submitted to the MPs in Parliament, but also presented before the public.

After the petition ended, the Organization intensified its activities in regards to the Initiative and publically demanded from the institutions, primarily the Parliament, to take specific steps for the cancellation of the privileges that cost citizens quite a lot.

As it is known, unfortunately, the Parliament has not responded to CIVIL’s demand until the end of its mandate. But then again, the State Commission for Prevention of Corruption and Conflict of Interests, on February 14 this year, at a public session reviewed and analysed the travel costs of MPs for the period 2015-2019. The second item on the agenda of this session were also actions on specific cases. Hence, at this Session, the SCPC concluded also that in the analysed period, 23 MPs had their own flats or flats of members of their immediate family that are located in Skopje. But despite this, those MPs had received compensations for using automobiles for arriving to and from work, namely for travelling to Skopje and back.

For the purpose of reducing the travel expenses of MPs, the SCPC suggests further regulation of this issue, in the sense of consolidating the legal and secondary regulations. Furthermore, harmonization of the regulation with the real possibilities of the state and the needs of the MPs is proposed, as well as determining precise criteria for using the rights to compensation of MPs on all grounds. All this needs to be supported by a methodology that will clearly and unambiguously determine the right to the type of compensation that MPs can use. In this context is Saso Ordanoski’s column “How to ‘spend’ Filipce”, who once again raises the question whether cutting salaries of all current elected and appointed officials, as one of the government measures, includes also the regular budget incomes of the two former, living and healthy presidents Branko Crvenkovski and Gjorgje Ivanov? Almost a year ago, at the height of CIVIL’s Initiative, Xhabir Deralla in his column “I protest against all big shots!” wrote: “The privileges in our poor country are like those little sultanates scattered around the globe (or flat Earth, according to some Macedonian “scientists”). Let’s just for a moment leave aside the stealing, all the stealing and abuses in order to collect money for private pockets. Generations of lawmakers have been (are) devising and voting laws on privileges and benefits for officials, from the smallest to the biggest ones, as if they were lords or, geographically more appropriate, Aghas, Beys, Pashas and Sultans. To put it mildly, for decades we have been seeing an extremely arrogant attitude

towards the money that is being collected from the tormented citizens of this piece of land that has been, I most responsible claim, impoverished precisely because of them”.

Questions and solutions that columnists, activists, some journalists and the SCPC have made in the past year are a reflection of CIVIL’s many years of efforts, but also of the citizens, among which also of the six and more thousands of signatories to the #End Profligacy Initiative.

Cancellation of the privileges of officials seems even more realistic in a time of a serious economic crisis caused by the COVID-19 pandemic. However, it is obvious that some of the institutions have no ear for such a need. The Constitutional Court did not find the strength to decide on the initiative of the State Commission for Prevention of Corruption and Conflict of Interests in regards to the privileges of former presidents, but expressly decided that the Government’s request for reducing the salaries of the administration and judges is unconstitutional. The Constitutional Court once again stood in protection of its own people, and not of the interests of the citizens.

Fifth anniversary of the biggest civil protest in...