Categories
Home Newsroom Musliu: We are not citizens’ representatives, we are protectors of citizens’ interests

CONFERENCE Musliu: We are not citizens’ representatives, we are protectors of citizens’ interests 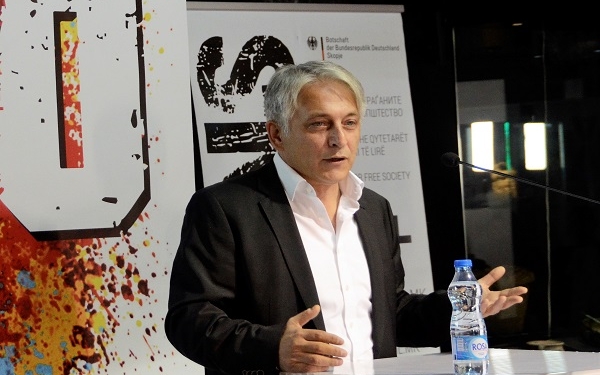 Albert Musliu of the non-governmental organization ADI, at the Conference “Between Hopes and Reality”, spoke about the challenges and perspectives of the civil sector in Macedonia.

“If the NGO sector has ever been original, it is here in Macedonia. We developed in an extremely unfriendly surrounding. There were no interested donors. We were not like Croatia or Bosnia, where the big international organizations employed people, trained them on what a civil sector is. So after they left, they had formed organizations.

Here, it was indeed original. At the beginning, I remember, here there was a group of interested people who didn’t care the least bit to be managed by others and wanted to do something. Our first activity in ADI was to encourage people back in 1994. I think that it was precisely because of that extremely unfriendly environment that we developed into sincere and genuine organizations that proved themselves for the first time in 1999. Subsequently, with the Kosovo crisis, the civil sector in Macedonia showed that it was nothing short of the institutions and that it can be up to par in performing certain activities, which were organized independently.

The second challenge was in 2001. We established contact with a friendly NGO from Tetovo for the first time, in a period when in Macedonia there were only two sources of information, MTV and CNN, and you can imagine how differing the information was. However, the civil sector showed that it is ready for cooperation of people who had enthusiasm.

Now in this period when we have institutionalized ourselves, and have many professionals in our organizations, and we do things well, sometimes it bothers me that there is not enough satisfaction in the entire process. The NGO sector should also give you some spiritual satisfaction. That is why it exists. If you want stress, go into business, if you want to steal, go into politics, but in the NGO sector I see people who like to doing that work. That is why when I go to the office I often put on music so that it is more relaxed, so that it is not just technical work that you are doing when preparing a report.

Certainly the Colourful Revolution was the culmination, after a longer period of stigmatizing of that anti-Sorosoid fight that our then government accepted, as part of some global movement against the civil sector.

The NGO sector profiled itself among the citizens as a sector that can be trusted. As a sector that is not motivated by the ultimate interest that political parties have, even in the creation of laws. NGOs do not have an ulterior motive behind their professionalism. Rather, they try to show their best in the interest of some ideals they need to move. Maybe I am a bit romantic, maybe idealizing should be part of work. A to the challenges of the NGO sector, I think that sometimes we too have a problem finding ourselves. We put ourselves in a position of citizens’ representatives, and not as protectors of the interests of citizens. We are not representatives. If we want to be representatives of citizens, we should propose a list on April 12, seek votes and so forth… We are that part of the citizens’ consciousness that without any interest thinks of the good of this society, and I think that we have proven ourselves in that, although the fight has not always been easy.

I still remember one meeting where representatives of the civil sector, who were younger, panicked in the entire process. You are facing the state. That process went on in the early 1990s when political parties used to put themselves in a position of trying to get NGOs to be their orchestrated institutions. They did not succeed in this. I think that the main exam was passed in 2015 and 2016 when NGOs showed that they are rebellious enough and have integrity to be able to refuse anyone. Even under the pressure of waking up one morning in a damp room in a neighbouring settlement in Skopje.

I think that we should see the future in that. Just positioning ourselves and our role in society. We should be a corrective, we should be the ones who have avant-garde ideas, to protect our ideas. With our position in society and with the support of the citizens, we can put enough pressure on politicians to adapt to the needs of the citizens and to respond to them. I think that is the main role.

How do I imagine CIVIL? Firstly, the cooperation has always been perfect for us. We haven’t had misunderstandings, because in principle, we have been moving in the same direction. I imagine them as a modern, European, revolutionary, rebellious, idealistic organization, which started with “citizens”, and I think that this made an impression on everyone.

Smailovic: CIVIL is a space in a time of rigidity...