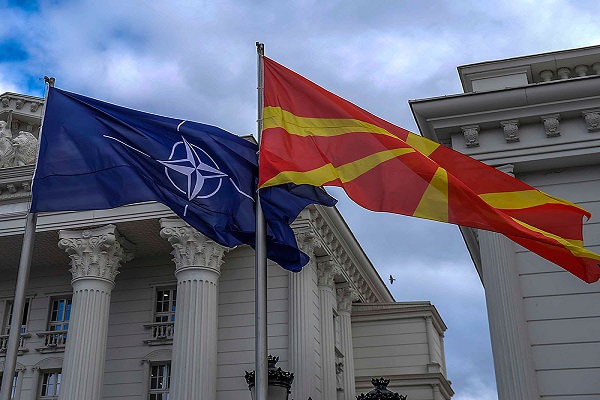 Spanish Ambassador to the United States, Santiago Cabanas, last night met with Deputy Secretary of State Philip Reeker in the State Department and handed over the original ratification document of the NATO Accession Protocol for North Macedonia. The document was voted on this week in the Senate and signed by Felipe VI of Spain.

President Stevo Pendarovski has just signed the NATO “Accession Instrument” of the Republic of North Macedonia, after several hours ago NATO Secretary General Jens Stoltenberg informed Prime Minister Oliver Spasovski with a letter that all 29 allies have ratified the country’s accession protocol. The depositing of the accession instrument in the State Department formally marks the start of the country’s NATO membership.

“On behalf of all the Parties, I am honoured to communicate to the Government of North Macedonia an invitation to accede to the North Atlantic Treaty”, is said in the letter from NATO Secretary General Jens Stoltenberg to Prime Minister Oliver Spasovski, announced the government press service.

Spasovski also informed about the letter today through his Facebook profile. – NATO has also formally informed us that all Parties have completed the ratification of the protocol for our membership.

Minister of Health Venko Filipce at today’s press conference at 3.00 pm announced that a total of 43 persons have been tested today for the coronavirus, of which three are positive, meaning that there are a total of 70 infected in the country. The number of patients will grow, assessed the Minister.

All patients are in a stable condition, mild to moderate, except for the patient who is on a ventilator at the Infectious Disease Clinic and is in a critical phase. Filipce indicated that of the three confirmed cases today, one patient had travelled to Serbia, the second patient is the grandmother of the four-year-old child infected with the coronavirus, and another patient from Skopje.

“There are coronavirus cases in Skopje, Debar, Gostivar, Stip and Ohrid”, added Filipce.

“We are informing the public regularly and accurately. We have been doing this from the first day and we will continue to do so… We inform when the accurate number of positive cases is confirmed, or is negative. We consider that this is not the time for exclusivity and that there is no time or place for sensationalism. The number of infected patients will continue to rise. We expected this. These are the announcements also of other countries where the number of patients and the disease are developing”, said the Minister at the press conference at 3.00 pm.

“Allow me to talk with the Health Insurance Fund and to solve this problem as well”, replied Minister of Health Venko Filipce to CIVIL Media’s question in relation to the costs for treating persons with coronavirus who are outside the health insurance system.

In North Macedonia there are people working part-time and have incomes, but are not in the health insurance system, and are not registered in the Employment Service Agency of the Republic of North Macedonia. Should they pay the health services related to the coronavirus or are the services free of charge for them? – was the question that CIVIL Media asked.

Unofficially, we learn that the position of those competent is that the health services of the public health care, related to the coronavirus, should be free of charge. However, as Minister Filipce said, we will find out the final answer to the question after his talk with the Health Insurance Fund.

CIVIL Media also raised the question to the HIF, and will additionally inform the public upon receiving a reply.

“We are living in a difficult time when all of us together share the same hardship and are facing a challenge of fighting it together. That is why, once again I call on responsibility by all, on joint action and solidarity. Only together, united, we can fight the coronavirus”, stated Zoran Zaev, President of SDSM in a video address to the public.

As of Monday, citizens will be able to report non-compliance to the Government recommendations for protection against coronavirus on the free of charge telephone line 191. Any citizen can report if they notice a catering facility working or an increase in prices of basic products.

As Minister of Economy Kresnik Bekteshi informed at today’s press conference in the Government, teams of the State Market Inspectorate will immediately go on the ground to determine the situation upon a report.

Minister of Foreign Affairs Nikola Dimitrov, upon his request, yesterday and today had telephone conversations with his colleagues, ministers of foreign affairs of Greece, Nikos Dendias, Albania, Gent Cakaj, Bulgaria, Ekaterina Zaharieva, Montenegro, Srgjan Dermanovic and Austria, Alexander Salenberg. The focus was on facilitating the process of interconnection between the countries during the crisis, with the ultimate goal of helping the citizens.

It was jointly concluded that maximum efforts would be made for dealing with the challenges that the world is facing because of the pandemic, with a main focus on providing unhindered transport of goods and returning citizens to their home countries.

The State Election Commission at its 66th public session, in accordance to the determined Timetable for the already postponed early parliamentary elections, had one item on the agenda: reviewing and submitting list of candidates for the political party “Your party”.

DUI’s economic section, led by Bardul Dauti, at a press conference presented proposals for improving the monetary policy in the country and improving the sectors affected by the situation with the coronavirus.

The Government’s press conferences as of today will be only on online streaming, without the presence of cameramen and journalists due to prevention. Questions for the press conferences during the day can be sent to [email protected] and to the email addresses of the spokesperson/person in charge of public relations of the competent ministry, by indicating the media outlet the question is from and for which press conference or minister (representative of institution) the question refers to.

Earth Hour has announced that they are cancelling all scheduled public events in accordance to the Government decisions for protection and prevention against the spread of coronavirus and called for citizens to take the action of turning off lights to their homes.

Citizens are constantly bombarded with fake news and disinformation. We dedicated this edition of SCAN political video magazine to fake news that serve as a massive political weapon, especially in the political campaigns that are led on the social networks.

Older persons need more support than ever in the...