Categories
Home Newsroom Krzalovski: What impresses me about CIVIL is the modesty

CONFERENCE Krzalovski: What impresses me about CIVIL is the modesty 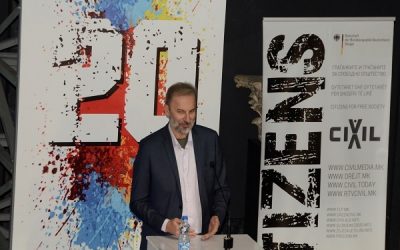 Aleksandar Krzalovski, MCIC, at the conference “Between Hopes and Reality”, on the occasion of CIVIL’s 20th anniversary, spoke about his impressions of the organization and its values.

“I think that with CIVIL we have known each other for a relatively short time, in the last 5 years, while previously the acquaintance between Xhabir and myself was mainly anecdotal. My presentation will be as such as is the nature of our acquaintance.

We knew each other mainly from receptions, briefings with foreign representatives and ambassadors where we usually were on opposing sides. Whether it was because of Xhabir’s artistic nature, he dramatized more, while I as a computer expert rationalized more, and as someone who believes in Einstein’s theory of relativity, was in charge of relativizing. I remember one of the meetings because Xhabir introduced so much drama and was fierce that I started my part with the statement: if it is like Xhabir says, I expect that they are eavesdropping on us now and that they will put us in prison once we leave this room. From today’s perspective, we were probably both right and they probably did eavesdrop on us at that meeting, but luckily they didn’t put us in prison.

It was a kind of relationship, not to say of unfriendliness, but something close to that. Which does not have to be a problem in itself. Actually, one of the secrets of MCIC’s success is in treating enemies, relatively speaking. Even I am employed in MCIC, although Saso Klekovski considers me an enemy since our student days. Nevertheless, that fierce relationship between Xhabir and myself was probably also as such. All up to the moment when we took over the management of the Civica Mobilitas 2014/2015 programme and when CIVIL received a grant from that programme. I still am sorry for announcing this on the phone, personally to Xhabir, for not telling him in person so that I could see his expression because he could not believe that they had received a grant from MCIC.

However, from what I have learned from then on, in a closer cooperation and associating with CIVIL were several values. Two were in the grants themselves. One is that I recognized CIVIL’s capacity to mobilize citizens and was one of the organizations that contributed most to Civica’s goals for citizen activism.

The second one was the modesty. Not to say I was shocked, but I was surprised when directors of half of the grantees had higher salaries than I did, that is ten times higher the organization budget, and should be a little the opposite. With CIVIL not only was it not like that, but also their approach was to keep as many people of the team as possible with minimum, not to say, modest earnings. Eight people from CIVIL worked on the Civica project. This struck me as a very modest approach.

Another value I would like to highlight is the freedom of speech. The fact that I am here probably shows just how much CIVIL is dedicated to freedom of speech and for everyone to say what they think, openly and directly, regardless of how good or bad that is for the one organizing the event”.

Karanfilova Panovska: The current challenge of...

Tomsic: The process of deinstitutionalization is...