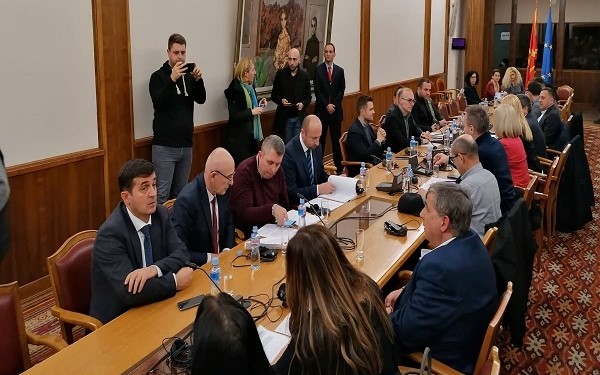 NEWS OF THE DAY: Even with the presence of the international community, unsuccessful working meeting on the Law on Public Prosecutor’s Office

The meeting between Minister of Justice Renata Deskoska and representatives of parliamentary groups where the Law on Public Prosecutor’s Office was to be discussed, lasted shortly and ended unsuccessfully.

Representatives of the US Embassy and of the EU, as well as representatives of the Blueprint Group for Judicial Reform – Informal Network of Civil Society Organizations also attended the meeting. From VMRO-DPMNE MP Antonio Milososki participated, and MPs from all parties and independent groups were present. At this meeting, Deskoska presented the draft solution to the Law on Public Prosecutor’s Office.

Previously, the opposition insisted in a public debate with presence of experts and the international community. However, Antonio Milososki, ten minutes after the beginning of the meeting decided to leave because State Public Prosecutor Ljubomir Joveski was not present. At a press conference, Minister Renata Deskoska assessed VMRO-DPMNE’s demand for the presence of the State Public Prosecutor as an alibi for avoiding the meeting on the Law on the PPO and justice in general, which should be achieved through this law.

With such an afternoon turn of events, the demand of the Independent parliamentary group for the Law on Public Prosecutor’s Office to be submitted to the Parliament as of today was not contented.

FLASH: Antonio and MVRO “show time” –avoided the meeting on the Law on Public Prosecutor’s Office

Xhabir Deralla: MVRO and Antonio didn’t offer reasonable reasons for avoiding the meeting with Minister of Justice Deskoska. All of a sudden, it occurred to them that State Public Prosecutor Ljubomir Joveski was not present at the meeting, so they didn’t want to present their remarks to the law without his presence.

POLITICALLY OK CORRAL: When the opposition doesn’t know what it wants, the Law on PPO again is left hanging

Perhaps the most exposed figure today was President of SDSM Zoran Zaev, who answered to multiple topics, conveying his and the position of his political party on the topics: elections, Law on Public Prosecutor’s Office and the visit of Charles Michel, President of the European Council, with whom he will meet tomorrow morning.

“I believe that (Charles Michel) will be able to give us more information as to when the adoption of the methodology itself is planned, about the attitude of the member states towards the methodology (about the process of negotiations for EU membership). To me it is important that I have confirmation from the President of the European Council that it will be decided in parallel on the decision for enlargement and for receiving a date for the Republic of North Macedonia, regardless of whether the methodology will be ready or not, we have a right to parallel decision and expect a date for the start of negotiations”, stated Zaev.

President Stevo Pendarovski will be the host of the head of the European Council, who will arrive in our country from Tirana. Pendarovski and Michel this afternoon will have a tete-a-tete meeting, and afterwards will hold a joint press conference. Current Prime Minister Oliver Spasovski is also expected to meet with Michel.

“The adoption of the Law on Public Prosecutor’s Office guarantees the European future of the country. It is a European success and success of the legal state. The need for passing this Law is increasingly more emphasized by senior EU representatives, and it is associated with a date for launching negotiations with the Union… I especially call on the opposition to overcome itself and by accepting the legal solution on the public prosecutor’s office, to prove that it is against crime and in favour of the rule of law”, Zaev was decisive.

Questions about the elections were also not lacking. Zaev stated that “It is still early to make decisions on the MP lists and their holder”. The procedure in SDSM starts on January 30, and the lists are to be submitted until March 17.

Two criminal charges were submitted today for two well-known figures in the Macedonian public. The Municipality of Bitola submitted a criminal charge for former Mayor Vladimir Taleski, while Emil Jakimovski, from the lines of VMRO-DPMNE, was accused of domestic violence and threats.

As the Municipality of Bitola informed, Taleski is being charged for abuse of official position in adopting an act for legalization of Mountain Lodge “Kopanki”, which according to the local authority is unlawful, whereas Emil Jakimovski for threats of murder.

“In the Republic of North Macedonia there is more export than import of waste”, stated today Deputy Minister of Environment and Physical Planning Jani Makraduli, following information on how much waste is actually imported (7 million tons). In terms of the hazardous waste, as he said, if we take a look at 2012, 2014, 2015, 2016, it is an enormous amount of imported waste. He repeated that in 2015 and 2016 he was out of work and added that he cannot know where anything had ended up.

What came as a surprise is the fall of 13 places for the country in terms of the level of corruption, while the Government is convincing that it is leading an uncompromising fight against corruption. According to the President of the State Commission for Prevention of Corruption, Biljana Ivanovska, if the “Racket” case is resolved, the perception of corruption in the country will improve, and citizens’ trust in the institutions will also increase. In the meanwhile, the SCPC and the PPO of the Republic of North Macedonia announced that with joint forces they will fight corruption through continuous communication and coordination of the initiatives that the SCPC is submitting to the Public Prosecutor’s Office.

Today is International Day of Education. On that occasion, Zoran Zaev wrote on his Facebook profile:

“We abolished the external testing, passed a new Law on Higher Education, we are reinforcing vocational and dual education, investing in new facilities, installing energy-efficient facades and environmentally friendly heating systems in schools, we increased salaries in primary, secondary and higher education by a total of 21.3%”.

President Stevo Pendarovski, at the symposium “Education as a factor for peace and sustainable development” on the occasion of celebrating International Day of Education, highlighted that the overall development and progress of human civilization is based on education and science.

At the end, even the nomination of Minister Renata Deskoska for a member of the Venice Commission, which has been accepted, bothers the opposition. Therefore, an opinion will be sought from the State Commission for Prevention of Corruption on whether Deskoska can perform both functions at the same time.

The National Security Agency has submitted to the Public Prosecutor’s Office all the information that has been requested from them in relation to the case with the confidential documents that were found with MP Frosina Remenski, confirmed the Director of the Agency, Viktor Dimovski.

Within the investigation for the “Racket” case, confidential documents were found with MP Frosina Remenski, which she claimed are documents that hide criminal acts and crime, for an alleged illegal use of Macedonian agents of UBK outside the country.

In regards to how far along the investigation on this case is, Dimovski referred the Public Prosecutor’s Office for more information.

STATEMENT OF THE DAY: Saracini: I encourage the citizens to be loud against media manipulations

The Council of Media Ethics of Macedonia brought four decisions: 4 websites, Vecer, Kurir, Infomax and Netpress have violated the Code of Journalists in reporting about Petrit Saracini’s tweet at the end of December 2019, during which they attempted to manipulate his view and present it as an insult to the Macedonians or Macedonian citizens. The Council of Media Ethics rejected only the complaint towards Republika, even though it concluded that they too had been part of the copy-paste attack against Saracini that day.

According to Saracini, professionals in the journalist field show serious intentions of addressing these issues, but that in Macedonia there is a lack of a more rigorous and more consistent application of punishment for hate speech and insult and slander. He encourages citizens to be loud and to address these anomalies, which citizens can probably notice every day on the social networks.

Perspectives 2020 – Krzalovski: Let’s show that we are worthy of Europe

“Over the years I have learned not to expect too much, and unfortunately, every year I expect less, even though many more things need to be done, because we have many unfinished things. If we think about everything we have missed, we can see that the things we had in the previous system during the time of Yugoslavia, that after 30 years, we still cannot return them in that order or to those standards and values”, says Aleksandar Krzalovski from MCMS for CIVIL Media about the Perspectives of Macedonia in 2020.

Krzalovski considers that 2035 is the earliest date for EU membership, by which time Macedonia will have more years of independence than it had been in the Yugoslavian Federation for 45 years, from 1945 – 1990.

Deralla on Morning Briefing: We don’t have a technical government, but a blocked system that endangers the election process

Instead of being a technical government tool for ensuring free elections, the technical government, because of such behaviour of certain officials who have cut into that module, is actually endangering the election process”, stated Xhabir Deralla, CIVIL, in Morning Briefing.

“A person would think that it’s a question of elementary political tact in the historic moment when Macedonia is becoming a member of NATO, for the head of our General Staff to show more allied sense in his international activity… But, that’s how it had “ended up” (according to the “annual plan”…etc.) for us to have in a four-day visit (?!) precisely the army chief of our northern border… General Gjurcinovski, as former Permanent Representative of Macedonia at the NATO headquarters in Brussels, in the above-mentioned historical context, should better understand the “ununiformed” subtleties in his current function. But it seems that General Gjurchinovski, a former adjutant of Gjorge Ivanov, who appointed him in 2018 to his current position, nevertheless, does not understand such delicate aspects in performing his function. Or, perhaps, on the contrary, am I wrong?” writes Ordanoski.

January 23: Without the Prespa Agreement, there...

January 27: Insults and offensive words between...