Categories
Home Newsroom January 23: Without the Prespa Agreement, there is no NATO membership, Sekerinska warns of the dangers, Parliament dissolves in 20 days, VMRO-DPMNE blocks Law on PO…

DAILY BRIEF January 23: Without the Prespa Agreement, there is no NATO membership, Sekerinska warns of the dangers, Parliament dissolves in 20 days, VMRO-DPMNE blocks Law on PO… 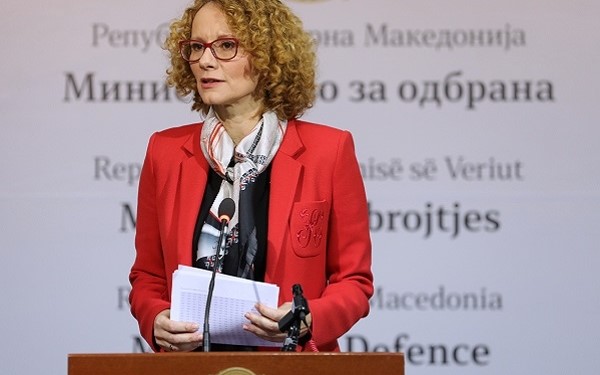 NEWS OF THE DAY: NATO becomes a reality, and membership is impossible without the Prespa Agreement, Sekerinska warns of the danger of conspiring ideas for its annulment

“Latest news from Spain are encouraging and allow me on behalf of the Government to welcome this news. It’s becoming clear that our priority is also the priority of NATO and priority of the member states of NATO, and the fact that the newly formed government of Spain immediately undertook for it to be ratified in a swift procedure shows that we are sharing the priority, for us to become a member of the Alliance as soon as possible”, stated Minister of Defence Radmila Sekerinska today.

As a responsible minister, Sekerinska outlined, in a department that is most directly related to NATO membership, I would like to most seriously warn of the danger of conspiring ideas for annulling or reopening the Prespa Agreement.

Sekerinska said that the newest intention, or manipulation, that certain political powers would try to reopen the Prespa Agreement for negotiations, precisely in these moments of our final steps towards NATO membership, is extremely irresponsible and dangerous. “Regardless of whether these allegations are manipulative or serious, to be touching on the Prespa Agreement that has been signed between two neighbours with the strong presence and support of the international community is the same as lighting gun powder here on the Balkans”, said in her statement Minister Sekerinska.

Sekerinska again called on the MPs of VMRO-DPMNE to support the Law on Defence.

FLASH: VMRO-DPMNE were against a raise in salaries, and yet now are “worried” that citizens have low salaries?

Dehran Muratov: Citizens don’t need false party news, rather true actions. Today, it is a fact that citizens have higher salaries, even though the MPs of the “worried” opposition didn’t support the increase in minimum wages.

The countdown has begun, the Parliament will ratify the NATO Protocol on February 11, and on the 12th it will dissolve. President of Parliament Talat Xhaferi plants to schedule a session on February 11 with a single item on the agenda – ratification of the Protocol for NATO membership of Republic of North Macedonia.

The next day, on February 12, the last session should be held, where the current parliamentary composition will dissolve and early parliamentary elections will be announced for April 12.

Again, everything revolves around the judiciary and the rule of law and justice. And while the head of the anti-corruption commission, Biljana Ivanovska, says that the perception of corruption will improve in the country if the “Racket” case is solved, but also that citizens’ trust in the institutions will increase, today the lawyers of Katica Janeva again did not come to the trial for the “Racket” case, hence it was postponed again.

However, a new Special Prosecutor’s Office for prosecution of crime will unlikely be formed, given that the opposition party of VMRO-DPMNE headed by Hristijan Mickoski is undermining the Law on Public Prosecutor’s Office by all available means. And who else do they blame for this, if not SDSM and Zoran Zaev? The citizens will be waiting for some better times with such an unserious opposition, before they finally start believing in justice and fairness.

The Parliament will probably dissolve on February 12, after a day it ratifies the Protocol for NATO membership. Minister of Justice, Radmila Sekerinska, also stressed that the elections in April in North Macedonia will be conducted as the 30th member state of NATO. She appealed to the opposition party of VMRO-DPMNE to stop with the theory of annulling the Prespa Agreement, as this only harms the country.

Some of the articles in the new proposed Law on Public Prosecutor’s Office are unacceptable for VMRO-DPMNE, as it violates the Constitution several times and puts the Prosecutor’s Office under the control of the government, said today at a press conference the President of VMRO-DPMNE, Hristijan Mickoski. He presented some of the remarks publically, and they are yet to be submitted to representatives of SDSM, who are to review them, and then have a meeting arranged.

“The City of Skopje will manage the Drisla landfill, which means that we the citizens are again owners of the city landfill.

After nine years of suspicious operation and unfulfilling the agreement for investments and modernization of the landfill by the Italian concessionaire, the City of Skopje through a legal and lawful procedure, through court institutions, has returned Drisla under its running”, stated Vasko Lazarevski, member of the Council of the City of Skopje from SDSM. He added that Drisla is a classic example of VMRO-DPMNE’s catastrophic investments.

One cannot expect that the journalists in our country, with miserable salaries of 300-400 euros, will ambition and investigate topics in the area of corruption and crime. Apart from them not being financially supported, they don’t even have elementary conditions for such work, so their reporting mainly comes to daily informing in which politics, protocol meetings and dull statements of officials prevail. Investigative journalism, as it was said at the annual conference that was held today within the framework of the project “Together in the fight against corruption” is marginalized also in the formal education. This subject in some faculties is put as optional, and in some others, in the sixth or seventh semester.

In today’s column “Revisionists in a pre-election offensive!”, Saso Ordanoski writes about revival of the image and work of fugitive Nikola Gruevski.

“Gruevski was great, but, due to this academic trifle with the “name dispute”, as a result of the American conspiracy, he fell from power! And then he had to courageously flee the country! We must not simply side-step this insidious attempt for revision of our more recent history and preparing the ground for returning Gruevski in Macedonian politics. The entire “secretion” of his propaganda machinery is not by far drained away…”.

About where our country is heading according to the Democracy Index: 10 years of stagnation and decline, 2 years of slow progress. Why?, writes Petrit Sarcini in his analysis.

“North Macedonia’s ranking on The Economist’s Democracy Index for 2019 has improved. After a long, ten-year period of stagnation and free fall, after the degradation that from a “democracy with flaws” put us among the countries referred to as “hybrid regimes”, these past two years, finally, we have a full turn of the decade-long course and, for the first time in a long time, we have progress on this reputable global index” – concludes Saracini.

The Western Balkans have turned to the left and are leaving the rightists and nationalists who are abusing patriotism in order to acquire personal wealth and power, writes Arben Zekiri in his analysis “The crisis and crimes of the rightists have strengthened the left-wing on the Balkans”.