Holstein: For us as Europeans, a key challenge is to continue to act in harmony

The personal experiences from the time of the German reunification, EU integration, regional cooperation and the Berlin process, as well as the war in Ukraine, are the topics of the interview of CIVIL MEDIA with the German Ambassador to North Macedonia, Anke Holstein.

The Day of German Unity is not just a very important historic date for Germany, but for the whole world as well. The German unity symbolizes the democratic transformation of Europe and the commitment for society of equal citizens, in which human rights and freedoms are respected. This is one of the topics for which Civil Media conducted an interview with German Ambassador to North Macedonia, Н. Е. Anke Holstein.

Personally for Ambassador Holstein, the German reunification 32 years ago is a special event.

“For me, the German reunification is something special. I was born and grew up in the GDR, so was my husband, and we are part of the ones who took to the streets in Leipzig to demand freedom and democracy. Without the fall of the Wall, I would have never become a German diplomat and today I wouldn’t be sitting here” – recalls Holstein.

THE COURAGE OF THE CITIZENS OF GDR SHOWED THAT DEEP GAPS CAN BE OVERCOME WITHOUT VIOLENCE, THAT A SYSTEM CAN BE OVERTHROWN AND THE PATH TO DEMOCRACY AND FREEDOM FREED – German Ambassador to North Macedonia, Anke Holstein (photo: А. Mehmeti / CIVIL)

According to Ambassador Holstein, the German reunification is an example of how deep gaps can be overcome and a system overthrown without violence. 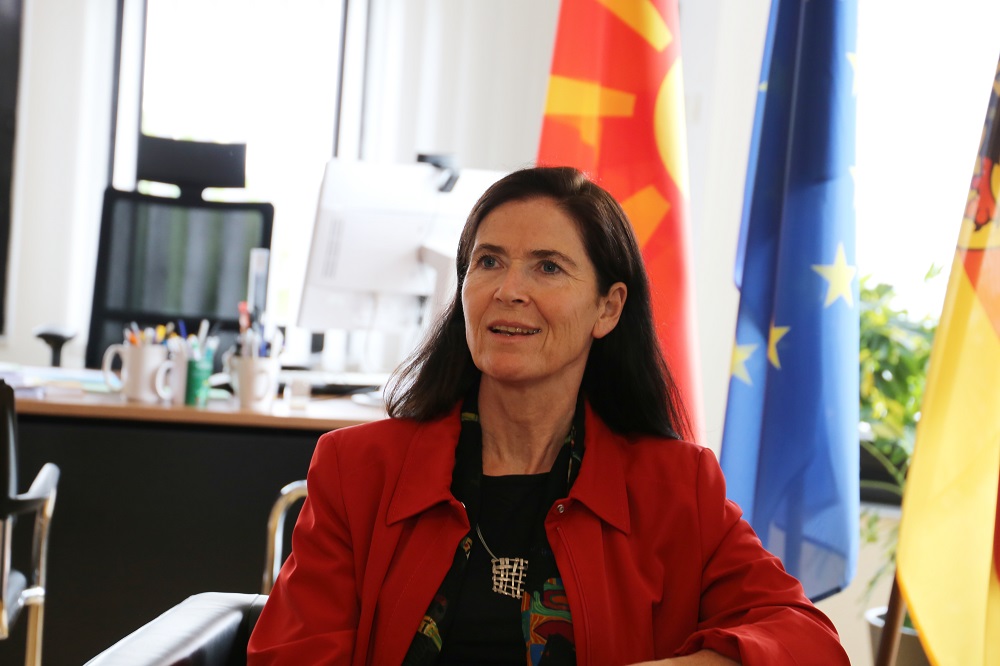 “The courage of the citizens of GDR showed that deep gaps can be overcome without violence, that a system can be overthrown and that the path to democracy and freedom can be freed. But without the support of our partners, our friends in the world, who believed in the peaceful and democratic development of a reunified Germany in Europe, all that would not have been possible” – said the German Ambassador in the interview for Civil Media.
Holstein also reflected on the support from Germany’s friends in the world.

“But without the support of our partners, our friends in the world, who believed in the peaceful and democratic development of a reunified Germany in Europe, all that would not have been possible”, said Ambassador Holstein.

without the support of our partners, our friends in the world, who believed in the peaceful and democratic development of a reunified Germany in Europe, all that would not have been possible – H.Е. Anke Holstein

CIVIL MEDIA: After 17 years of waiting, finally, the gates of the EU have opened for North Macedonia and Albania. Certainly, this is a big change in society, politics and the economy in the country. What are, in your opinion, the main challenges and perspectives in this process that has just begun?

HOLSTEIN: First of all, I am very happy that this extremely important breakthrough for the first intergovernmental conference finally became possible. Personally, I am sorry that the road to there was so frustrating, long and hard and so much was demanded from North Macedonia. The decisions were right, but on the way there we lost some of the hearts and minds of people, the task of the European Union and its member states, and especially Germany, is now to gain once again the hearts and minds of the people and to prove that the decisions were the right ones.

The screening process for Albania and for North Macedonia started completely identically, there are no differences, the only difference between the two countries is that North Macedonia awaits constitutional changes, so that besides other ethnic groups, the Bulgarians are included in the Constitution. I hope that all democratic and Europe-friendly forces in the country understand that it is a step that simply has to be made. Or else, the following months and years will be characterized by something for which we in Germany have a nice saying – “the difficulty of the plain”. It concerns the acquis communautaire, to translate and implement the common law of the European Union into the national law. The pace of the reform process in North Macedonia will determine how fast the country can become a full member of the EU.

The reform process is not just a goal on itself, but it’s about the country modernizing and preparing itself extensively, for example, for the market to also be able to withstand the market of the European Union. Or for the system of the rule of law, the chapter that is first opened and last closed, to truly correspond to European standards, not to be only on paper, but also in reality. This extensive process of reforms and modernization is for the people in the country, they will benefit from it.
North Macedonia can rely on the unlimited support of Germany in this process.

The system of the rule of law, the chapter that is first opened and last closed, to truly correspond to European standards, not to be only on paper, but also in reality – German Ambassador Anke Holstein (photo: А. Mehmeti/CIVIL)

CIVIL MEDIA: Recently, German Chancellor Olaf Scholz announced restarting of the Berlin Process, which started in 2014, but wasn’t active two-three years. In the meanwhile, the Open Balkans initiative was born, as well as other projects for regional connectivity. Are there possibilities, in your opinion, for the Berlin Process, as one big and complex effort, to include the Open Balkans initiative, that is, all of them together to become one big, joint project? What are the challenges?

HOLSTEIN: That’s the idea, to do everything possible to improve the understanding and cooperation between the countries in the region to be put within the framework of the Berlin process. One of the major goals of the Berlin Process is a common regional market for all six countries. The Open Balkans is surely a first step that makes sense for the way to there, but not inclusively, because there are countries that do not belong to it and that is why it’s limited in its action and benefit. The common regional market, as it was prepared within the framework of the Berlin process with a joint Macedonian – Bulgarian presidency in Sofia, would include all six countries together. Currently, there are negotiations so that there is progress.

IF WE GO BACK TO THE BEGGININGS OF THE BERLIN PROCESS, IT REALLY HAS ACHIEVED MUCH. IN 2014, WHEN THE FIRST MEETING WAS HELD, SERBIA AND KOSOVO SAT AT THE SAME TABLE TOGETHER FOR THE FIRST TIME WITH THE FLAG AND NAME OF THE COUNTRY– German Ambassador Anke Holstein (photo: А. Mehmeti/CIVIL)

PERSONALLY, I FIND THE THOUGHT THAT AT EVERY MOMENT, EVEN AT THIS MOMENT WHILE WE ARE SPEAKING, PEOPLE ARE DYING IN UKRAINE FOR OUR FREEDOM AND OUR VALUES, HARD TO BEAR – German Ambassador Anke Holstein (photo: А. Mehmeti/CIVIL)

CIVIL MEDIA: The world is affected by the difficult consequences of the brutal Russian aggression against Ukraine. In the reaction of the free world, Germany is among the leading countries. It seems that it’s not getting as much recognition compared to how much assistance it is offering, probably because of its reluctance in the first days of the war to send direct military aid to Ukraine. However, Germany remains a very strong ally of the free world that is helping the Ukrainian nation to fight for peace and freedom. North Macedonia has joined the freedom world, but is facing, like other countries, polarization in society in this context. What is the way forward?

HOLSTEIN: Allow me to first say that Germany particularly appreciates that North Macedonia very quickly, in the first hours, joined the sanctions of the EU against Russia, as well as the previous sanctions from 2014. From the very beginning, North Macedonia has adhered to the principles, the parliament condemned the war of the aggressor, the country is accepting refugees, the country is sending weapons, and is further joining all sanctions, has supported the corresponding UN declarations, that is a position that we highly value and are thankful for that.

Personally, I find the thought that at every moment, even at this moment, while we are speaking, people dying in Ukraine for our freedom and our values, hard to bear.

I believe that in the future it is key for the European Union to further remain in harmony, that is a challenge.

Only when the European Union and all peaceful democratic free countries further remain in harmony, firmly and together, will we be able to together hope that this war will soon end.

Such an end must in any case guarantee the territorial integrity of Ukraine.

As I said, for us as Europeans, the key challenge is: we must further act in harmony. My favorite quote from Barak Obama is: “The EU is my best partner when its united”.