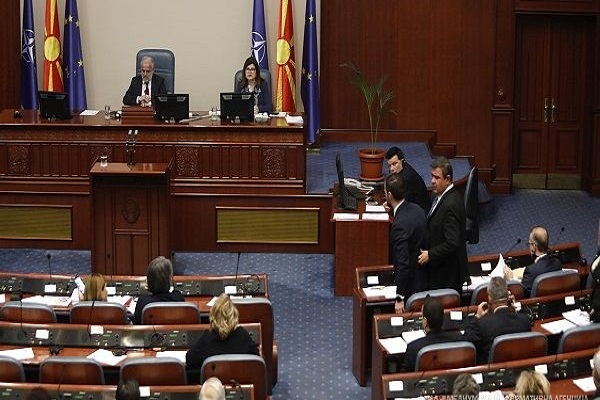 NEWS OF THE DAY: Marathon parliamentary session on Law on PPO finally begins, the end uncertain

Two sessions have been announced in Parliament today. The session on the Law on the Public Prosecutor’s Office was to start at 11.00 am, and the session on the dismissal of Technical Minister of Labor and Social Policy Rashela Mizrahi and amendments to the Electoral Code at 3.00 pm.

The first session started with a delay due to the consultative meeting of President of Parliament Talat Xhaferi with parliamentary groups. The session started with procedural quarrels on party basis, and not with a discussion on the Law on Public Prosecutor’s Office. The first break was given upon the demand of VMRO-DPMNE MPs. The next break was requested by MP Emilia Aleksandrova from the independent group of MPS of VMRO-DPMNE for the purpose of calming down the situation between the MPs, immediately after the confrontation between Antonio Milososki and Krsto Mukoski.

The situation escalated when Milososki accused Mukoski of receiving a tender from the Government and asked whether he still is a terrorist for SDSM, and Mukoski replied with even harsher accusations towards Milososki.

He called him a criminal and added that people like Milososki are keeping the political party VMRO-DPME in captivity. Mukoski accused Milososki of having encouraged the crowd to enter Parliament on April 27.

“It’s good to see the nervousness. You, colleague Milososki, will be telling us about justice? You have the nerve? You have found yourself called on to protect and defend the rule of law, you who have destroyed it, and now you are making one-act plays”, said MP Kosta Kostadinov from SDSM in Parliament today.

He called on VMRO-DPMNE MP Antonio Milososki to hand over the bombs for which he claims that the prosecutor’s office has, as they are no longer judicial institutions as in the time of VMRO-DPMNE and the “Swarovski” judiciary.

“All those who are involved in cases, accused, whether they are in an investigative procedure or not, should not participate in a discussion for this law”, said Daniela Rangelova at today’s session in Parliament on the Law on Public Prosecutor’s Office.

Mizrahi and the Electoral Code at a same session, immediately after the voting on the Law on PPO, but there is a possibility for it to be postponed given the large number of registered speakers.

Xhabir Deralla: Bad actor and politician Jovanovski, certainly, does not deserve to be commented on separately. But his pathetic and empty performance at the podium is, in some way, a good illustration of the “argumentation” of Ilija Dimovski and the parliamentary group he still keeps under control.

STATEMENT OF THE DAY: Ivanovska: Every denar needs to be valued rationally, almost 3 million euros for five years are huge money!

“We are all witnesses that we are not a very wealthy country, on the contrary. Also, that the drops of sweat are very heavy of those who give money to the state budget. Every denar should be valued rationally and spent that way as well. Let’s not be misunderstood, we do not have the intention of restricting someone’s right. But to determine the most rational use of budget funds within the possibilities of the state according to a certain methodology for determining the right and the amount of fees that will enable MPs to function and come to Skopje. However, for this to be within certain limits. Not to have such huge amounts of money, because nearly 3 million euros for four, five years is huge money!”, stated the President of the SCPC, Biljana Ivanovska.

For VMRO-DPMNE and its technical ministers it doesn’t mean anything that someone is appealing, demanding, insisting for the SEC not to be strained with meaningless requests and to let it do its job within its competencies, and resources, no matter how much they are …

At today’s 27th session of the State Commission for Prevention of Corruption, the report on the analysis of the travel expenses of MPs for the period 2015 to 2019 was presented, which shows that MPs have spent 2.895.605 euros in a period of 5 years.

The SCPC concludes that in the analysed period, 23 MPs own their own apartments or apartments that are owned by their immediate family members located in Skopje, despite the fact that these MPs received allowances for using a car for coming to work, that is, traveling to Skopje and back.

“It is not clear in which way it has been determined that a smaller surface of 80 square meters is a condition for an MP to exercise the right to rent an apartment. Does this mean that if an MP has two apartments of 75 square meters that they can also rent an apartment? Furthermore, the decision also does not determine the right to a maximum square meters for renting depending on whether the MP lives alone or with a family. From the rent agreements that were submitted to us, it is evident that the same amount is paid for different square meters, for example, regardless of the place, location and surface of the apartment, they all receive 400-euro compensation payments, plus 100-euro compensation payments for overhead costs”, stated Katica Nikolovska, member of the SCPC.

“With the very way the work of the representatives of the Venice Commission is regulated, the members do not give opinions and do not participate in matters related to the countries they come from”, stated the members of the Anti-Corruption Commission at today’s session of the SCPC.

The SCPC dismissed the complaint as being unfounded, and no violation was determined in the manner in which Deskoska was nominated as a representative of North Macedonia to the Venice Commission.

Zaev: I believe the laws will be passed, the Parliament will be dissolved on time and the elections will be held on April 12

SDSM leader Zoran Zaev today in Negotino expressed assurance that the laws will be passed, that the Parliament will be dissolved on time and that the early parliamentary elections will be held on April 12.

“I believe that according to the rules of procedure rights they have, they will give a chance for the discussions to be completed for all of these legal solutions, for them to be voted on, and then for the Parliament to be dissolved”, he outlined.

He stressed that SDSM has a serious, large and unique coalition capacity due to the concept of one society for all.

“Because of the bold decisions we have made in the past, and we will not leave this not to be used normally all in the function of a serious victory, serious clean mandate that will provide a stable parliamentary group with a majority of votes in the new government in the next four-year mandate, because there is a serious process of real transformation of our entire society and work at home on the economy”, added Zaev.

President Stevo Pendarovski, Minister of Foreign Affairs Nikola Dimitrov and Minister of Defence Radmila Sekerinska will participate as representatives of our country at the 56th Munich Security Conference.

Dimitrov, in the meanwhile, today in Munich started his participation in the Munich Security Conference with an address at the panel discussion “Building Social Sustainability in the European Neighbourhood”.

“There is no other way for Europe to maintain its leadership role in the region and to be a trusted partner, then by the integration of the countries that are not only geographically and culturally already a part of it, but also the course of their political action is directed towards the European model”, stated Dimitrov at the panel.

The Minister of Defence will address the panel “Disrupting the Perception for Better Leadership”. Within the framework of the Conference, Sekerinska will participate in an informal meeting of defence ministers that is organized by German Minister Annagret Kramp- Karrenbauer.

At the 56th Munich Security Conference, participation of more than 500 leaders has been announced in the field of politics, business, academia, civil society, health organizations, including more than 35 heads of states and governments and more than 100 foreign and defence

CIVIL tomorrow will hold a training for of the long-term observers at the upcoming early parliamentary elections to be held on April 12. In the meanwhile, the call for short-term observers is still ongoing and will run until February 20, at 12 noon.

CIVIL invites all of its members, supporters and participants of seminars on citizen journalism, observers of previous elections, as well as all interested citizens to apply for short-term election observers. (LINK TO APPLICATION)

Please, Parliament, dissolve already! – calls Saso Ordanoski: Numerically and personally produced by the travesty of the last elections, when with great difficulty the “Bastille” of the previous government was being destroyed – “dictatorship”, “regime”, “autocracy”… choose a qualification upon your own choice –  the Parliament has gone through, convincingly, the filthiest period of Macedonian politics, since its independence.

The first signal of more recent diplomatic time was presented to us by former Macedonian President Gjorgje Ivanov. In the general commotion of a certain major international meeting in the US, he conveyed the content here of his seeing with the most powerful world leader… Europe is sending us Signals. Our people are still napping between the covers of notebooks with homework tasks that German expert Reinhard Priebe has left us. – from a corner by Zoran Ivanov.

– burst by Xhabir Deralla: For years, the foundations of the already destroyed legal order have been attacked, and the negotiations on the law on the public prosecutor’s office are just a final episode of the criminal structures’ fight against the rule of law and democracy in general. The criminals could not come to terms with the defeat they suffered with the Colorful Revolution. The Parliament is one of their important strongholds.

Victory against the conscience and consciousness...

Ali Ahmeti's party has shown that it favors VMRO...