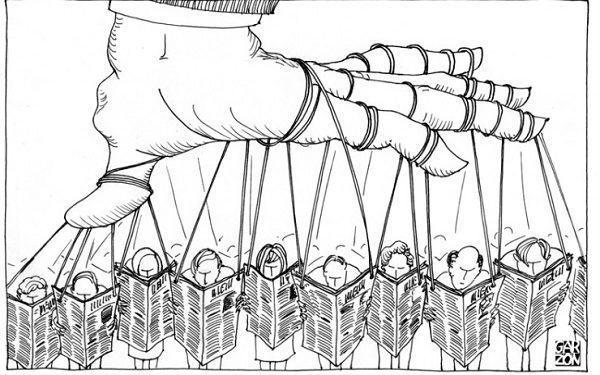 As long as quasi journalists and opinion makers that behave like gangsters, and at best as shoe cleaners, dominate the media space, while those who keep to professional standards and ethical norms live on the brink of existence – we cannot expect real freedom in the media.

As long as there is impunity for sowers of hatred and creators of fake news and disinformation, while those who report facts and evidence of crime, corruption and abuse of power, office and public resources end up in court or are under any form of pressure – there is no freedom of speech.

As long as the production of a large number of the rich internet media is based on “facts” that have been published by “ordinary citizens” (party agitprop) on their “innocent” Facebook profiles – there is no media freedom.

As long as there are journalists who fear for their lives or for their or the safety of their loved ones, when they risk losing their jobs because their boss, a politician or businessman does not like them – the right to freedom of expression and information does not exist.

As long as complacent journalistic elites think that the expression “right to freedom of expression and information” refers to them, and not that it’s a fundamental human right – not only is there no media freedom, but also no media.

As long as editors and journalists establish a fake balance in the style “5 minutes for the Jews, but also 5 minutes for Hitler” – there is no freedom of expression and information.

As long as objective criticism and disclosing of wrong practices and actions are made in the media under the control of nationalists and criminals and at the same time they are turned into a dirty agitprop pamphlet – so much for objective information.

As long as the richest and most dominant in the public are nests of party like-minded people and propagandists, semi-literate thugs and dull-witted, while at the same time a large part of the public treats them as journalists, and calls their ransacking caves media – the society is a clinical case.

As long as there are media that are financed with black money in the interest of anti-Western centers of power and of the criminal regime, and that is tolerated both by the public and the institutions – there is no freedom in that society, just fear and uncertainty.

As long as someone thinks they should pay an advertisement or in any other way enable the existence of a quasi-editor or journalist who is threatening and blackmailing (racketing) – the law of the jungle rules.

As long as the media are treated like feudal property, and media workers as serfs – we will continue sinking.

As long as there are journalists who are afraid to write a text against the nationalists and criminals, “just in case” they return to power – the criminal regime is still alive.

As long as freedom of speech is equated with hate speech and spreading nationalistic, religious and racial hatred, and all of this does not encounter any public condemnation, let alone sanctions – there is no hope for that society.

As long as the infodemic is not taken with the same seriousness as the pandemic, the White palace will remain the Bastille of lie, hatred and destructiveness.

CIVIL congratulates May 1: The pandemic and...

CIVIL: Achievements in the area of freedom of...