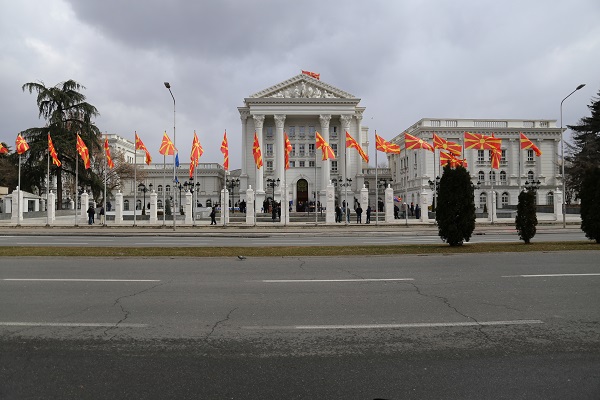 MOI: We strongly reject the attempt of individuals and political subjects to involve the MOI in the events in the Islamic Religious Community

The MOI informs that when police officers arrived at the headquarters of the Islamic Religious Community at Bit Pazar, they did not determine violations against the public order and peace.

Bosnjakovski: The Government is not interfering in the work of the religious communities

North Macedonia is a secular state and the Government does not interfere in the work of the religious communities, stated today Government Spokesperson Mile Bosnjakovski, in regards to yesterday’s disorder in the Islamic Religious Community.

The reaction followed after yesterday, following the extraordinary session of the Riyaset of the Islamic Religious Community, Rexhepi in part of his statement accused the director of the

Today the trial for the “Magyar Telecom” case continues in the Criminal Court in Skopje against the former general and financial director of Makedonski Telekom Atila Sendrei and Rolf Plath, as well as other two persons for abuse of official position and concluding fictitious contracts for consulting services with Cyprus firms.

At today’s hearing it is expected for former Prime Minister Vlado Buckovski to also testify as a witness, during whose mandate the Protocol between the Government and Makedonski Telekom was signed.

The trial for “Magyar Telecom” started in 2011, and after the case was taken over by the SPO.

Carovska: We are working on revising the Law on safety and health at work

Minister of Labor and Social Policy Mila Carovska said that what is particularly important is that the Government is strongly committed to further advocate for the promotion of the health of workers and safety at the workplace, and is also working on preventing accidents and illnesses related to the work and workplaces.

The State Commission for Prevention of Corruption today rejected the complaint of VMRO-DPMNE for the Municipality of Gjorce Petrov. The SCPC accepted part of the complaints of the opposition and are already being processes according to the anticipated deadlines, while the complaints from the citizens will go in a regular procedure.

For two cases, the SCPC are still waiting for information from the MOI as the information is classified. At today’s session a decision was made for closing several cases in which nepotism has not been determined, which refer to employment of children of officials, such as the case with

Following the 18 cases of employment nepotism analysed by the State Commission for Prevention of Corruption, at today’s session it was announced that the commission would address the competent ministries with a proposal to have an analyses made on the laws regulating employment in the public sector, with the purpose to determine the risks for influences and abuse of the discretionary powers in the employment process, for which it will notify the Government and Parliament.

– The interview is used as a basic tool for selecting candidates, criteria for evaluation of personal and professional qualifications of the candidates have not been determined, nor is there a practice of preparing a ranking list. Having in consideration that with the legal acts an obligation has not been determined for adopting procedures for implementing employments procedures, discretionary right of the responsible person is used in most cases – clarified the President of the SCPC, Biljana Ivanovska.

Double standards of the electoral administration After yesterday’s publication of CIVIL Media about two polling stations where members of the Election Boards had forgotten to put stamps on some of the ballots, CIVIL’s team received information about another polling station, this time in Stip, where during the counting of the votes it was determined that as many as 90 ballots were without a stamp.

Members of the Election Boards concluded that they had not thought about the stamp until one of the voters had noticed that a stamp was missing on his ballot, but it was already too late for the previous 90 voters.

During the counting of the voting, it was concluded that a total of 90 ballots were without a stamp.

CIVIL: April 27 not to be forgotten and never to...