ДНЕВНИК (23:00) State of emergency, day 60: Sunday non-working day for everyone, “Weekend without VAT” gain for everyone, election date determined …

ELECTIONS “The date for holding elections has been determined from when the Decree with force of law was adopted for stopping all election activities, which means that the election deadlines continue after the state of emergency end”, said tonight Prime Minister Oliver Spasovski in an interview on TV Klan.

WORKER’S RIGHTS THE FEDERATION OF TRADE UNIONS (SSM) in the direction of promoting workers’ rights and democratic values, proposes for Sunday to be a non-working day for all workers. Such an initiative of SSM is already being shown in practice and many employers at their own choice have declared Sunday a non-working day, and this is an example that other employers need to follow as well as the government. VAT According to Minister of Finance Nina Angelovska, “Weekend Without VAT” is beneficial both for the citizens and the economy. As Angelovska explained, the MyVAT application enables certain limits to be set, how many receipts, in which sectors, how much the return will be, whether it will be a 100 percent return for certain products and all this will be enabled as the application functions, all with the purpose to implement that weekend with a greater VAT return in sectors targeting domestic consumption of domestic products and services.

POSITION SDSM is with a clear position that there should be elections the first moment the health situation allows this, if the emergency situation ends by May 30, then the first election date is June 21. As SDSM MP Jagoda Shahpatska stressed, Mickoski is running away from elections, his claims are not based on medical findings, experts estimate that the risk for elections in June would be the lowest.

DECISIVENESS “The Macedonian citizens need a Parliament, a functional one, and a political government with full and new legitimacy from the citizens, and we have an obligation to provide this. The interest of the citizens and the state come first and we will not allow anyone, not even Mickoski, to threaten their health, to threaten their economy and to threaten democracy. Mickoski and VMRO-DPMNE’s running away from elections is useless. There is no escape, there will be elections and they will lose at the elections”, stated Zoran Zaev after the leaders’ meeting.

FREE ZONE “He is constantly telling his dream that he will be a prime minister, but he doesn’t want to run… he feels like a failed athlete… According to him, financial assistance shouldn’t be provided to heal the wound of the pandemic as much as possible, because that would be election vote-buying, and there isn’t even an election date – because he isn’t allowing this”, burst by Xhabir Deralla “If someone feels failed, do we all have to fail?” 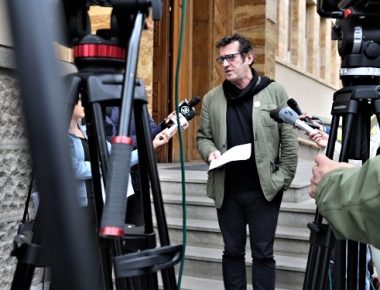