Categories
Home Newsroom Zaev: We chose democracy, equality and the rule of law on the path to EU

POLITICAL DIALOGUE Zaev: We chose democracy, equality and the rule of law on the path to EU 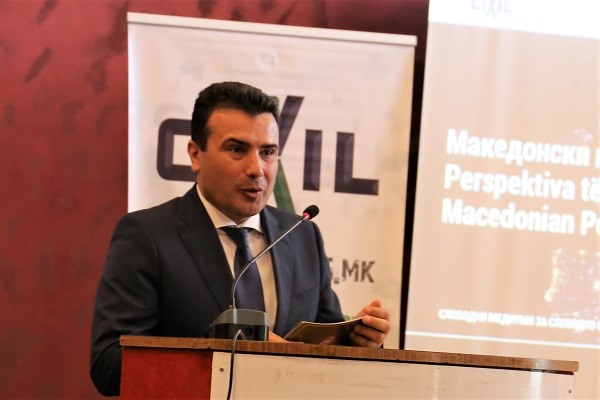 The Conference “Macedonian Perspectives: How to Get to Europe?”, organized by CIVIL and MCMS, opened a new type of political dialogue on priority issues for the future of the country that depend also on its accession to EU and NATO.

Prime Minister Zoran Zaev in his address highlighted the most important benefits from joining EU and conveyed the significance and opportunities of the Government in realizing full membership in the European Union.

“Allow me to build my speech based on a series of answers to the question in the topic of this Conference “Macedonian Perspectives: How to Get to Europe?”.

However, before I answer this question, after our friends in Brussels set us a date when we will start to walk, chapter by chapter, the final steps to our full membership in the European Union, I would like to ask you to recall why we chose EU membership to be our strategic goal?

In the following period we need to always keep reminding ourselves again and again that:

We chose to promote peace, security and stability for our citizens, like all Europeans in the Union did.

We chose freedom and justice for our citizens, with no exception. That is a – European value.

Like all Europeans, the citizens of Republic of Macedonia also chose sustainable development and economic growth, in a common, market economy of the European Union, which provides jobs, social progress and a healthy and protected environment.

We chose our strategic goal to be the fight against discrimination and social inclusion for all citizens. For no one to be neglected.

We chose together with our friends and partners, member countries of the Union, to be part of a technologically advanced community in which all members of the European Union are united based on the principle of equality and solidarity. A Union of maximum respect and affirmation of the cultural and linguistic diversity, as a common European cultural heritage.

In the following period we need to always keep reminding ourselves again and again that:

We chose to respect values and to be an integral part of the European value system:

The dignity of every person is ultimate and undeniable. It is European to respect it, protect it and for it to be the essence, the foundation of all human rights.

We chose to be citizens of the European Union without national borders, and to freely choose the place where we will live, where we will work.

We chose a community that maximally protects and respects privacy, and individual freedom to religious affiliation, freedom of expression, guaranteed with the European Charter for protection of the fundamental human rights.

We chose democracy, equality, the rule of law.

We chose values that for 11 whole years were not part of our society and because of that, they distanced us from our strategic goal – the European Union.

But that is why today, when we need to answer the question “Macedonian Perspectives: How to Get to Europe?”, we can say: We know how!

For one year, we gave the European Commission, the EU leaders and the member states sufficient arguments. That is why last Friday the President of the European Council, respected Donald Tusk, welcomed us and said:

The same day, the European Council, and all the leaders of the member states, without any remark accepted the decision.

The first of the series of answers to the question “How to get to Europe?” is in the arguments for an overcome political crisis and significant progress in the implementation of the urgent reform priorities. The European Council concluded this!

Additionally, the Council concluded that the new government, as of May 2017, in a difficult political context, has improved the political dialogue, has strengthened democracy and the rule of law, has shown a sincere wish for inclusive and transparent reforms and has improved the relations with its neighbors.

The package replies to the answer “How to get to Europe?” has to contain the fulfillment of the basic European right of every citizen for free and democratic elections. the European Council wrote: Conditions for holding elections have improved. Credible parliamentary and local elections have been held. Citizens; trust has been restored.

The European Union would have still remained a far destination if our partners and friends did not recognize progress in the independence of the judiciary, in the work of the courts and of the SPO.

The European Council says: There are improvements in the judiciary. There have to be legal consequences for the abuses that arise from the wiretapped materials from 2015. There has to be responsibility for the attack on the Parliament on April 27, 2017.

In this area, we have been left with serious homework: To boldly and decisively continue with the implementation of the strategy for judicial reform. The European Council wishes to see additional, concrete results for the independence of the judiciary.

Ahead of us is the period that is given to us for us to deliver these expectations.

And they will be delivered! Too much has been invested. It concerns the European future of the country, and everyone who thinks that they have a different answer to the question “How to get to Europe”, are lying to themselves, but more importantly is that they are lying to the – Macedonian public.

There is also no other answer for the necessary additional reforms for the rule of law, for the fight against corruption and organized crime and for the reforms in the public administration.

Effective implementation of the anticipated reforms is the only answer. There is no other alternative.

There is no other alternative to the question “How to get to Europe?”, when it comes to the role and including civil society in the democratic transformation of our country.

On the list of checked items for Republic of Macedonia, the European Council concluded that the inter-ethnic relations of the country have improved significantly, and that the foreign policy is in line with that of the EU.

The agreement with Greece is especially highlighted, which closes the long-standing bilateral issue. The entire democratic world accepted and acknowledged that the way in which the agreement was reached is completely in accordance with the best European traditions for resolving even the most complex issues.

That was the decisive moment for the European Council to accept the decision for setting a date for negotiations, as a response for the entire progress achieved, which at the same time is also a response to the question “How to get to Europe?”.

Dear participants of the Conference “Macedonian Perspectives: How to Get to Europe?”,

With our country entering the final phase of the process of joining the European Union, the delivery of concrete results in the reforms continues, and that being in the urgent reform priorities in the judiciary, in the reforms of the administration, in the fight against corruption, as well as full implementation of the agreement with Greece.

However, the question “How to get to Europe?”, has another, very important addition: the delivery of results does not stop with membership in the European Union.

With the membership in the European Union a new, continuous delivery of conditions and of results will start that will enable our citizens to finally live the European values, in a society that is on the threshold of providing those standards.

Now these are our realistic, feasible perspectives. This generation of politicians and citizens have an answer for them”, stated prime Minister Zaev. The Conference is part of the project “Free Media For A free Society” that CIVIL is implementing with the support of the Federal Foreign Office of the Federal Republic of Germany.

Xhaferi: The safety of the citizens is more...

Culture is the front page of every society