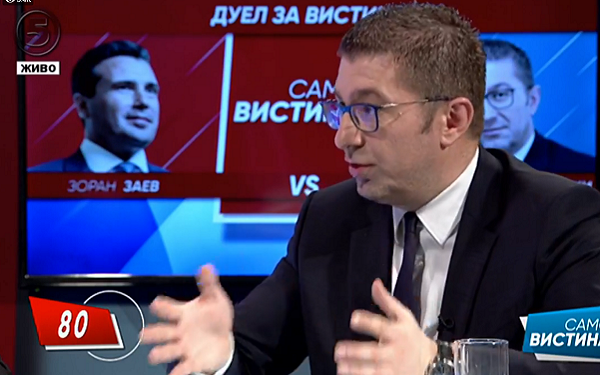 For Mickoski it is extremely important for the elections not to be held in June, and if possible, for them not to be held at all, at least not while he is (formally) president of the party. He has started a massive campaign for discrediting all those who have relevant views,

analyses and experience on topics related to the electoral processes, in order to bring to the surface, the opinion of his “expert” team as the only correct one.

But it turns out that this “expert team” of Mickoski has a serious problem with relevance. Both the party and its experts remain stuck in the dark political dead end. This after all is not such a big surprise. It concerns a structure that at no time has shown determination to give up the destructive criminal and authoritarian past and the regime that it carried out from 2006 to 2016.

One of the arguments for postponing the elections that Mickoski has used, perhaps even naively, without sufficient understanding of the matter, is based on a completely distorted elucidation of the views of the Venice Commission. This international organization in its report stipulated that there is no rule in international law that would prevent States from holding elections or a referendum, even during a state of emergency.

Through Mickoski’s “calculator” it looks like this: “…a document of the Venice Commission that is becoming increasingly more present, and that is that about 60 days are necessary after the state of emergency expires for those early parliamentary elections to take place, or parliamentary elections in general”, as he is quoted on the party website on May 10. They have such a rule in Georgia.

What is happening with Mickoski and his party? Why is it that for more than two years they have been constantly calling for elections, but just don’t want them to be held?

Let’s recall, immediately after the local elections in 2017 when SDSM to their own big surprise won almost everywhere at the local level, Nikola Gruevski fell into “deep analyses”. What happened, happened. Gruevski withdrew from the comfortable honorary position of president of party and placed his loyal subject, energy advisor, and once owner of several hydropower plants, as president of the party. The veterans themselves in VMRO-DPMNE who now are either excluded or keep quiet, say that all that had been everything but democratic, intraparty elections. Already at the beginning of 2018, having still not yet sat in the highest party position, so to speak, Mickoski started with the demands for early parliamentary elections. It was the same during the presidential elections in 2019, when with his candidate and current expert advisor they were trying to guess the name of the city in which they were in (Kocani – Kavadarci, Negotino, and so on) and were left with unsettled 400.000 euros in the report.

When in October last year, after returning from Brussels, Zoran Zaev called for snap early parliamentary elections to be held in December, Mickoski, instead of being happy, quickly withdrew. At the leaders’ meeting in October 20, 2019 with President Pendarovski, he had begged for the elections not to take place so soon, and thanks to Zaev’s confidence (and lenience), the elections were scheduled for April 12, 2020.

What should have been snap early parliamentary elections, has turned into delayed elections. The pandemic additionally delayed the elections, but not the campaign of Mickoski and his party. But now when the time is nearing for the election process to continue and when the elections realistically can be held mid-June, Mickoski is again demanding a postponement!

The answer to the question whether it’s about personal insecurity may be hiding in the fact that Mickoski did not appear also on the candidate lists, even though Zaev, at the duel on TV Kanal 5, invited him to confront in the Fourth constituency. But more than the personal insecurity of the politician who presents himself as a good mathematician could be perhaps the party assessments that now is not the time for them to go to elections.

With full NATO membership, a date for EU negotiations, successfully dealing with the coronavirus and several other major achievements on the account of SDSM, on the one hand, and the scandals that have been following VMRO-DPMNE, on the other hand, one does not have to be a good mathematician to conclude why in the White palace (illegal construction) they are not in a hurry for elections.

Why elections are needed in June and not when Mickoski estimates – in the next episode.