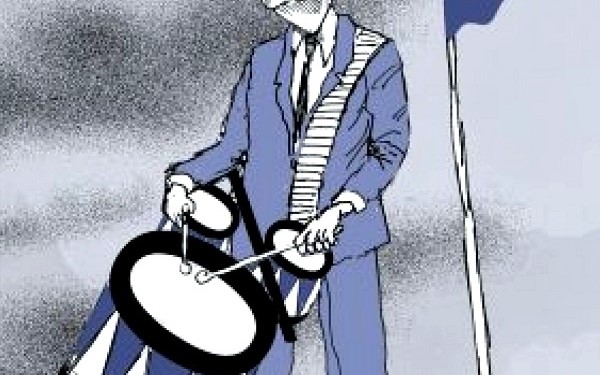 It’s about justice! That’s what I once exclaimed, several years ago, at a meeting with a legal expert and lawyer that was representing me in a court process with the rotten filth of Gruevski’s Regime. She smiled and asked me where I was living and if I had fallen from Mars. She asked me how I could be so naïve and mix justice and law?! I tried to explain that we must not accept such a reality. That’s exactly what the Regime wants, for us to accept that. I continued talking a lot, just as I wrote a lot all over these years. She listened to me patiently and at one moment she told me to get down to earth and to pay attention to the matter in front of us… justice and law remained divided, on different sides of the Macedonian universe…

Now, years later, a time when I’ve had to get down to earth many times and look at the cruel facts of reality, I saw that law and justice live at different addresses and rarely meet. But, yes they have started to meet, and they’re also acquaintances now. The price for that was the fall of the SPO, in cooperation with the “neutrals”, and paid and directed by the big remnants of the Regime. Certainly, there are many other elements in the story here, but in general, that’s that.

Indeed, we were really naïve to expect, like in Marvel’s or DC Comics’ superhero movies, the criminals to raise their hands and remorsefully go to jail. No, instead of that, they are striking a blow against the system every day, everywhere. Just like in the legendary series “Gotham”, the criminally insane, at the same time, insanely enriched from the stolen money, don’t even think that it’s time for them to give in. On the contrary, they invested as much as they could and couldn’t manage to distort everything that implies normalizing and restoring the rule of law and democracy. And why do we need to be normal, when we have been living for such a long time in an abnormal country!

Hence, we come to the disturbing issues about the exceptionally well-devised, expensive plan of the organized pilot-criminal in this country. And while all eyes were on solving the main problems that pressured the country and isolated it, precisely because of the politics of the criminally insane, they (the criminals) worked on carrying out a plan that challenges the possibilities and talents and the best Hollywood screenwriters. Certainly, with an ever more open and nervous support of the Kremlin. It became obvious at the very start that our criminals are at the mercy of Putin. But the machinery under Putin’s claws is supporting them only because they can be used to inflict harm on the entire country and prevent its progress. That’s no love at all, they’re just pawns in the game, where the dirty moves are made by the Russian dictator. They need influence here, that’s all! At one point, they’ll take their money and throw them in the dump. Putin’s love is towards money, luxury and power, there’s no emotion here towards anything else. The Regime’s criminals are not much different, they’re just miniature compared to him.

The crime story of North Macedonia is entangled and exciting, often funny as well, if seen from a distance. If you’re entangled in it, it’s not the least bit funny. Usually, nothing can be done, except to watch powerlessly how the criminals are succeeding to throw a cheap hook to the public and to enjoy the effects of fake news and misinformation. Street-wise rude, they managed to give a completely different flow to the Macedonian pace to the future. They managed to equate all the benefits of the democratic and non-violent fight against the Regime with the Regime itself. To make the people lazy, bitter and paranoid.

Their campaign succeeded, at least to some extent. And they’re doing their best to depict the oppressors as victims, and the criminals as benefactors.

Like never before, we deserve to join the democratic world, and they’re constantly mumbling and crying (crocodile tears) that treason has been committed. In a normal country, they would be lonely marginal people, but here they dominate in the media, in the public. because they have lots of money, fantastically large amounts of money, accurately and deliberately focused towards the center of changes.

So you have a huge political party, at the head of which is (honourably) a legally convicted person who is enjoying asylum from an autocrat like him (Gruevski-Orban). That party, not only has it stayed out of the creation of a better and brighter Macedonian history, but is rather trampling ruthlessly against every hard earned benefit on that path. They are working in favour of all those who are wishing this country bad, and even with Putin and with Mitsotakis.

Mickoski is a courier. He’s over his head in the scandals that are being opened and in which it doesn’t bother him to violate laws, because he’s hiding behind the legitimacy that he’s getting undeservedly from the numbers in parliament. However, he is obliged to answer. If the system is powerless to stand in his way, the public will certainly wake up one day and will ask him. How did you manage, with a professor salary, to provide yourself a multimillion business with hydro power plants? The asylum seeker’s nervous cousin also asked him this, who is one of the most powerful people in the country, the one who enjoyed home custody in Hotel Marriot. The public will also ask him how much money he gave to Orce Kamcev and to his party. He will also have to answer to questions about his role in the scandal known under the title “racket”, even though this is a typical corruption case.

Mickoski and his party also have to answer questions on the real motive why he blocked the process of judicial reforms, even now, after they succeeded to take down the SPO. The motives are obvious, but they have to explain them and admit them. A lucky circumstance is that in the negotiations they’re dealing with someone like Minister of Justice Deskoska, who calmly, but firmly said that she’s not an optimist for the negotiations, because she knows who she’s dealing with. And Zaev who is also negotiating with a smile, is not giving in to the demands for impunity of criminals. That’s good news. Just as are all the news coming from the centers of the world democracies – the Bundestag, the White House…

When we look at the judicial processes in the world, where the rule of law is far more advanced, we see that they’re slow. But the law catches up even with the most powerful and those beyond reach. The wheels have been set in motion here, in this country that is now in the center of world attention with good news that even we are increasingly more hearing, when we want to. And the best news for Mickoski, his boss and the Family would be if our country, for instance, doesn’t receive a date. For them, good news is very bad news. And they’re good in creating bad news. That we have to acknowledge.