BURST The rent of spoilt Horhe 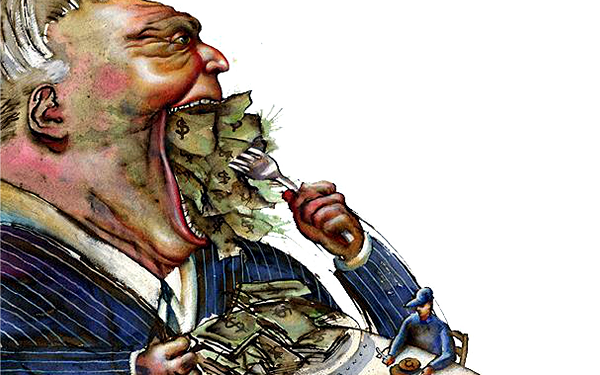 The voiceless in the machinery of Gruevski’s criminal Family, the man who we compared to a decorative plant that is put in corners at home. Or Horhe, which is thought to be according to a character in the Monty Python comedy, though the genesis of the nickname is more

serious. A colleague of mine from the media called him this way because he won his first mandate in the style of the arranged elections in the South American dictatorship countries.

He has slowly grown into a symbol of the regime and was directly credited for the latest wave of civic revolt, the Colorful revolution. This is the man for whom there is talk that he had planned to establish a dictatorial clique following the coup, the attack on the Parliament on April 27, 2017. The same person who showed a 5.000 euro cost for a tie (trifle), while he usurped the presidential function for a whole decade.

The same person who fiercely hindered the Macedonian Euro-Atlantic path and at the same time embarrassed the country, because so much has been given to this man. Indeed, we must also admit that he often did made us laugh with his ridiculous gaffes, but even more often left us unpleasantly surprised with his inappropriate choice of expressions and curses. “It was nice while he was silent for seven years” – was often heard among people.

There, that man, Gjorgje Ficus Ivanov, even though he gave as much as he could from himself against the changing the name from FYROM to the Republic of North Macedonia, it didn’t bother him and just let his hand down and reached for the public good (of that same North Macedonia). He signed with that country, against the interests of which he worked, a huge (around 100.000 denars) monthly pension and rented overly expensive offices – from himself, from his Family, paid with our money. And a bunch of other privileges such as chauffer, staff and similar toys for a luxurious old age. All this from North Macedonia, all this from the citizens who he considers less valuable then himself. Consistent to the end. My colleagues didn’t manage to find information on whether he had asked for three offers, at least formally, but even if he did so, it will mean that he’s become just more cautious, nothing more.

Nevertheless, things in our poor country have started changing. After long complications, half a year ago, we received a real State Commission for Prevention of Corruption (the previous one was just a smoke screen for protecting the Family’s criminal). That commission, led by seven dedicated people that the Parliament selected in an unusually transparent procedure, heard the voice of the public and investigated the Ivanov case, or, let’s call it by the name of “R”, but this time accordingly for – Rent.

I read the report of the SCPC on the analyses and conclusions. I claim that such a text can rarely be read from another institution in the country. Without any pardon, the facts are

relentlessly listed, while the conclusions are direct and clear, without any avoiding or hiding behind legal empty phrases.

The SCPC, investigating the kind of privileges former presidents enjoy in other countries, especially from within our surrounding, comes to a conclusion that there’s no such example of life-long privileges and spending in any other country. This luxury is especially evident because it takes place in a poor country such as ours. The privileges in the countries of the region are limited, in Montenegro and Croatia to 5 years, in Serbia to a maximum of 6 months (a period in which the former president is expected to be employed or fulfil the conditions for retirement according to the Law on pension and disability insurance), and in Slovenia the privileges last a maximum of one year. We’re talking about the Balkan countries! All of them with a higher standard than ours, of which two are members of the EU!

The SCPC also shares information on the amount of the privileges of the former presidents, not taking into account the money we have given for the mind-blowing high pensions and other compensations. In the past 10 years of the Budget of the RNM, 67.070.379 denars, or 1.090.581 euros, have been paid just for rents, utilities and official vehicles. Way to go! Deservedly, there’s nothing to it! (exclamations from me)

Hence, the SCPC concludes: The General and Common Affairs Service of the Government to terminate the agreement for rent and to allocate offices that are in state ownership, with the purpose of saving money on rents in the amount of 4.500 euros monthly. To submit an initiative to the Constitutional Court for the assessment of the constitutionality of the Law on the rights of the president of the RM. To submit an initiative to the Parliament of the RNM for reviewing the law, in the sense of limiting the time duration of the privileges of former presidents.

With its thinking and action, the SCPC completely coincides with the general idea of honesty, uncompromisingness and decisiveness. The Initiative “End Profligacy” for termination of privileges of officials that my friends and I started half a year ago, starts out from that position. And this time as well, like so many other times in the past several months, the SCPC has made my day. With all due respect!

I’m sure that we have to start from somewhere, so let it be Horhe’s rent and the continuation of SPO’s cases, through the (somewhat) reformed PPO. We’ve been disappointed so many

time in the past, therefore there’s not a single reason for us not to be optimists now. One more time.

Kostadinov: We are expecting the cases to finally...