Categories
Home Newsroom Social democrats leader, Zoran Zaev promised to form a government that will care for all citizens

STATEMENTS Social democrats leader, Zoran Zaev promised to form a government that will care for all citizens 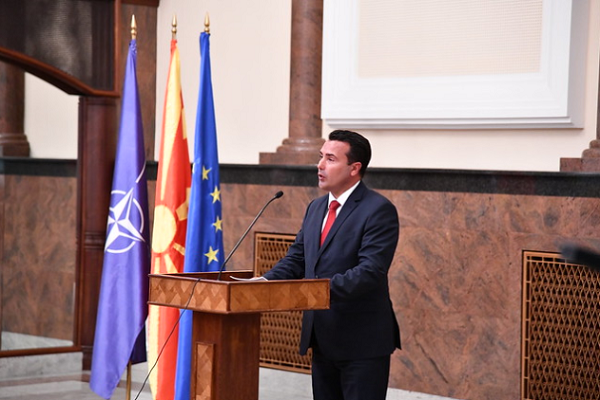 After the constitution of the new parliamentary composition today, the leader of the social democrats, Zoran Zaev, who won the early parliamentary elections on July 15 with a tiny majority, has issued a statement. We are publishing the full statement here.

Today we received a new House of democracy of North Macedonia and of all Macedonian citizens. Our Parliament today held its first, constitutive session with participation of people’s MPs who are expressing the will of the citizens who voted in the parliamentary elections on July 15.

On behalf of SDSM, the coalition WE CAN and of all 46 of our elected MPs, once again we thank the citizens for the democratic capacity and responsibility that were demonstrated at the elections – and once again I assure you that with our 46 MPs, and I am sure that there are many more such MPs in this composition – together we will show even greater responsibility to our own people and own state – we will build an independent Parliament – we will represent, above all, the interests of the citizens and of the state, before the party interests – we will serve the people!

The state belongs to everyone equally. The state is our joint responsibility. With this cause, today we commit to building an independent and responsible parliament, a true house of democracy.

This common house of ours will also elect the next democratic, political, responsible, European government. Starting today, we are starting negotiations for a new four-year, full term of a stable majority in Parliament, a majority that will bring us a stable and committed four-year government that is prepared to work.

We will talk only about forming a government that cares for all citizens equally, free from any ethnic partiality or nationalism, a government that has no dilemmas when it comes to our common path that is called “North Macedonia – One Society for All”.

We will talk about a government that is determined and that will fight crime and corruption at all levels – everyone will bear their own responsibility, regardless of whether they come from a political party, from a municipality, from an institution, whether they are an expert, official, known or unknown.

We will pay special attention in the area of cleaning the judiciary and on checking the origin of money and capital of every official, through a system that we will jointly agree.

Ecology, clean and healthy environment, eco state, will all be one on the most important topics that we will commit to.

The future factors in the new government will need to be prepared for a serious reform of the public administration as well – we are talking about a change that will bring efficient service to the needs of the citizens, but also a change with which the size of the administration will be reduced by 20%. We are talking about a smaller number of ministers and about rationalization of the public services, but with greater number and quicker services for citizens.

Finally, the government for which we will talk, will have the NEW MACEDONIAN ECONOMY in the first place on its European and citizen agenda. The main principles are: salaries to continue to grow, to invest in the youth and in balanced regional development, to take special care for the most impoverished

citizens and to give continuous support to the domestic private sector. Strengthening the economic standard of all citizens will be an imperative of the new government.

This is what the citizens demanded and that is what we will deliver.

I expect that in 10-15 days we will have an outcome from these negotiations and that very soon we will raise the Macedonian institutions to a full capacity so that they can deal with the greatest challenge, the unseen COVID-19 enemy. Autumn is ahead of us, which brings a new school year, a new heating season, new challenges to hospitals – ahead of us is a joint battle for the public health and economic progress.

Twice more and better work awaits us – with the engagement of each of us, I am convinced that together, responsibly and in a dedicated manner, we will succeed! Because we truly can – we can do more and better!

Parliament constitutes, Zaev will be reducing...