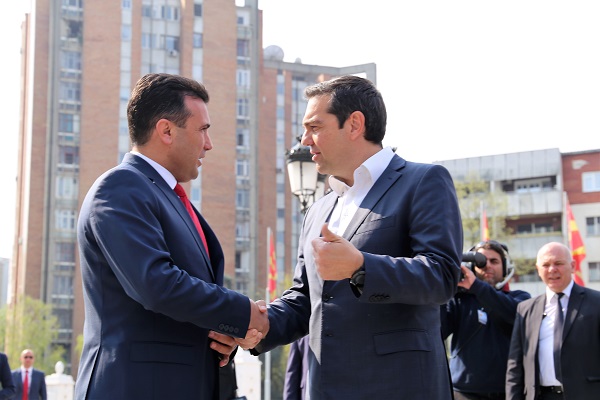 NEWS OF THE DAY: Tsipras in Skopje

Former Greek Prime Minister and leader of SYRIZA, Alexis Tsipras, today is in Skopje and in the afternoon hours will meet with Prime Minister Zoran Zaev. Tsipras tomorrow will participate in the Economist Summit “Reinforcing the Momentum for European Integration”, dedicated to the Western Balkans, and at a separate panel discussion, together with Zoran Zaev and Martin Schults, will debate on the topic “What are the next steps for European integration of the Western Balkans?”.

Parties to overcome differences in election of officials of important institutions

The President of Parliament, Talat Xhaferi, accused that the state auditor, AAVMS, MRTV and several other important institutions are victims of political stubbornness and disagreements between political parties.

“My responsibility is to convene a plenary session for those points if the work of the committees ends, or to convene a session of a committee if the president of the committee does not do so. We have a session convened, but have no epilogue because of disagreements and party stubbornness”, said among else Xhaferi. He reminded that we don’t have a state auditor for a year now, and that it is a very important institution, that is why he called on the parties to let go of the stubbornness and to overcome the situation.

Bulgaria to build a national stance on North Macedonia

The accession of the Republic of North Macedonia to NATO and the European Union is an important step that guarantees peace, stability and sustainable development and prosperity of Southeast Europe. Bulgaria has always principally supported the European and Euro-Atlantic perspectives of the Republic of North Macedonia. Let’s not forget that we were the first to recognize the independence of that country, stated today Bulgarian President Rumen Radev.

Minister of Labour and Social Policy Mila Carovska today attended the opening of the regional meeting on monitoring the progress of the Beijing Declaration and Platform for Action for Gender Equality (Beijing +25), which is being held in Skopje.

The principle opinion of the Supreme Court for the SPO is in force and has guided the events, said today Supreme Judge Xhemail Saiti.

President Stevo Pendarovski today met with members of the Macedonian Banking Association, where bankers presented the achieved results, but also pointed out the challenges ahead of them.

A new model for assessment of children with disabilities-MKF has started to be applied in the Center for Functional Assessment and Support of Children.

Quotas on drugs will be abolished as of tomorrow, announced today Minister of Health Venko Filipce and Prime Minister Zoran Zaev.

The citizens replied to CIVIL’s question as to what kind of future awaits us, black or green, and how the local self-government and the state care for environmental protection. The citizens of Bitola, despite all the problems they have with the air pollution, still think that a green future awaits the country.

CIVIL supports the Initiative “Buy a creation, be part of an eco-donation” for the renewal of the forest by Lake Mladost of activist Marija Pupulieva from Veles, who decided to use her creativity for providing seedlings for the burned areas near Lake Mladost and the village Oraoec.

Kosta Stoimenovski writes today about the indifference of the Macedonian political elites to clear up the crime and corruption.

The fight that the government realized in this phase has the effect of cutting off one or two heads of the criminal monster in Macedonia. And let’s not fool ourselves, if all of them are not “booted”, those who will remain, will participate in the regeneration of the ones who were cut off, that is, until their sprouting, considers columnist Milan Banov.

“Already at the start of this historic phase following the unblocking of the Euro-Atlantic integrations, it appears that due to greedy personality reasons, the Macedonian political elites are furthermore immature to provide their citizens and their state a European future. It seems as if though such an unjust environment suits the most influential party subjects, both one and the others”, considers Zoran Ivanov in his column “The negotiations will finally push our decade long walk in place”.

Which story is Mickoski going to tell?