Categories
Home Newsroom October 3: One society for all, vetting working group in the MOI, rebranding of SDSM, Mickoski’s 120 constituencies…

DAILY BRIEF October 3: One society for all, vetting working group in the MOI, rebranding of SDSM, Mickoski’s 120 constituencies… 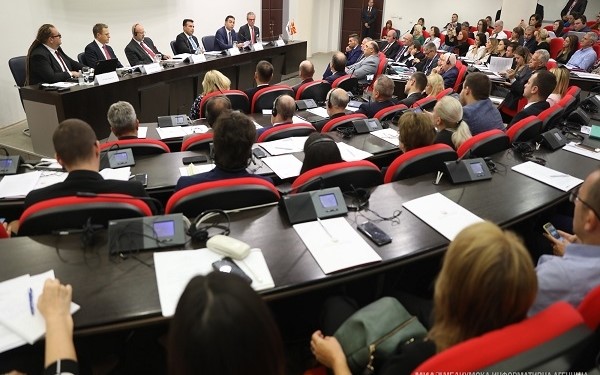 One society for all, diversities need to unite, and not divide

Today the Conference “One society for all, diversities need to unite, and not divide” was held in the Ministry of Interior, with Prime Minister Zoran Zaev, National Coordinator for Development of Culture Robert Alagjozovski, Minister of Foreign Affairs Nikola Dimitrov, OSCE Head of Mission to Skopje, Ambassador Clemens Koja, OSCE High Commissioner on National Minorities Lamberto Zannier and Head of EU Delegation to the Republic of Macedonia Samuel Zbogar all taking part in the discussion.

The discussion, which also includes experts, MPs, university professors, will result with a final review and finalizing of the process for final adoption of the Strategy.

“We are scanning the draft version of the National Strategy, incorporating all the constructive remarks on integrating the ethnic, religious, cultural and linguistic differences”, stated Zaev.

“Promoting cohesiveness of our society equally accessible to all is one of the main indicators for the successful Macedonian story that we all want to build”, said Dimitrov.

The protest of students in Idrizovo transferred to the Parliament, Zaev says parents are given a choice

The session for parliamentary questions started with a delay because DUI coordinator Ejup Alimi with a procedural request insisted for the MPs to be outside the parliamentary hall for one hour just as Albanian students in Idrizovo are not attending classes for a month.

Parents of children from Idrizovo have been protesting for a month and are not sending their children to another school. They demand that they remain going to school in the village of Jurumleri also from sixth to ninth grade, that is, to have classes opened for them in Albanian language and for them not to have to go to other settlements. According to the Municipality of Gazi Baba, it is not financially sustainable as teachers need to be additionally employed.

The Government at yesterday’s session adopted the information and the Draft plan for measures, activities and dynamics of implementing the process of verification (vetting) of employees in the Ministry of Interior.

Law on defence will be harmonized with NATO obligations and rules.

The first President of the Republic of Macedonia, Kiro Gligorov, was assassinated 24 years ago on October 3, who survived with serious head injuries.

SDSM is rebranding itself and is launching the campaign “On the right path” with strong citizen participation.

Hristijan Mickoski, VMRO-DPMNE leader, will propose 120 constituencies when talks will begin on the amendments to the electoral model.

120 constituencies, one for each MP? Weren’t we going to reduce the number of MPs?

In cooperation with: Diana Tahiri, Маја Ivanovska and Angela Petrovska

Call for participation in CIVIL’s seminar on...

October 4: Pompeo and warnings about external...