B.L. is employed by a public institution. She has been working hard for almost 25 years, caring for the health of the residents in a public institution in the municipality. But after the worsening of the political crisis and the appointment of a new manager, she and her colleagues are exposed to pressures and harassment.

Herself, as well as others who are in the same situation, fear to publicly speak about their problems. B.L. had already been fined through wage cuts, but if she speaks, she is afraid she would get fired.

According to the testimonies of G.I. that works in the same institution, working conditions are unbearable, among other things, because the institution is converted into a party headquarters.

“During working hours, half of the staff, party members and activists are holding meetings and planning next steps in favor of the party. That was the case right before the annual conference of the Union of Women of VMRO-DPMNE, as well as during the period when lists of secured voters were made for VMRO-DPMNE. Simply, the institution now functions as a political headquarters” -said G.I.

“It’s already unbearable. Although there is a security officer at the institution, we are on duty alone at night. How can a woman handle over 100 residents of which some are diagnosed with mental illness, alone at night? On one occasion I was attacked by a resident with such a diagnosis. And when we took him by car to a neuropsychiatric hospital, the director accused me that I had damaged the institution, and that the institution will lose 200 euros a month, by losing a resident” – witnesses B.L.

B.L. is the mother of 5 children and says that all the problems and trauma she is facing are reflected in her family life. She tried to find a solution with her husband many times, especially because she has a document stating she has a partial disability after surviving a severe car accident. But although she’s been forbidden to lift weight, in fact every day, as she claims, she is exposed to this effort, because you have to take the residents for a bath, and some of them are hardly moving.

“The disability document that I received from the Commission was not taken into account neither by the previous nor the current director. They also did not recognize my high education diploma. The director refuses to listen” – adds B.L.

Another person we spoke to, G.I. reacts to the behavior of the director who violates their privacy insulting them and inspecting their personal lockers.

“One day he came and told me to open my locker and threw out everything I owned to check whether we have stolen something from the home. There are other ways for control, if one suspects theft, but not this”, says G.I. 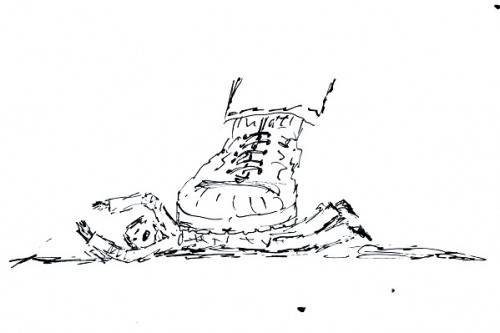 She also claims that the director, for a certain period, was using the official vehicle for private purposes.

“How can official cars be used like that? After-hours, director would go home, and come back to work in the morning. Well, why don’t we all take the official vehicles and drive home and back. And, when we take residents to the hospital for examination, we have to take a taxi, paying from our own pockets, and we do not always get our money back” – the two employees in this institution witnessed.

We got a confirmation for this situation by other employees as well. All of them insist on anonymity. They are convinced that every step they take is being followed, and fear that their phones are wiretapped, and said they receive warnings for their Facebook likes.

“We do not have political membership and probably that’s the reason we are out of favor with the director. Because, there are employees who work practically nothing. Those are the political party supporters who only show up at work, then take a business vehicle, park it on the boulevard, drink coffee in a café, and when the time comes to go home, they just leave the car back in front of the building here, and call it a day. But if they happen to spend more time at work, then their job is to follow and spy on us, which is why we’re all afraid to speak freely or even to meet with citizens that have an opinion that differs from the government opinion” – state our sources.

If they gather the courage, as they say, they will approach higher levels of power. Some of them have asked for help from the local government, but nothing happened. Labor Inspection did nothing either, since people close to the Inspection are employed in the institution.

The staff at this facility are extremely disappointed with the situation because they do not see a way to exercise their workers rights.

The institution is partly financed by the Ministry of Labor and Social Policy, partly by monthly fees paid by the residents. But the institution is facing huge financial problems, with debts in the amount of one-year income.

Half of the employees are political party members who received their working papers in the last couple of years.

According to statements of the previous managers, this institution, in the good times, functioned smoothly with half the number of employees it currently employs.

The author, locations and names of the sources in this story are held secret to protect them from pressures and threats.

CIVIL has written statements from the sources and other evidence to confirm the validity of this story.

In defense of the bare survival

Arsova: Who’s the one deciding on Lake...