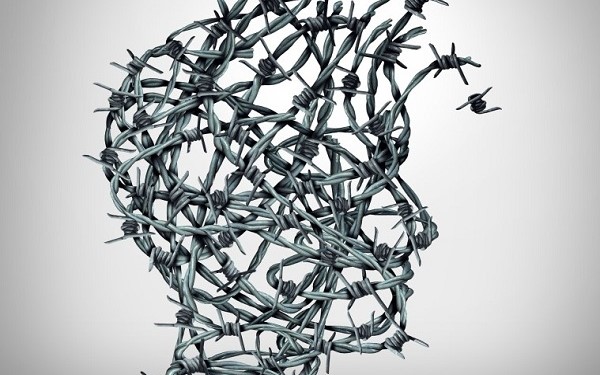 A courtroom in the capital city of a small, poor and agonised country. A human rights activist and journalist tried to seek justice before the court, suing a television station, the director, editor and journalist for defamation and insult. The court process lasted almost three years.

In the meanwhile, the court spared and released the director, then the editor and at the end, the little journalist was left to defend the television station and himself. He didn’t need much effort, since the court itself had already decided to defend him, as a supporter of the regime, and to drag the activist and journalist for years and to play with the law and with the basic human right to a fair trial.

All that moral waste had to do, which is falsely portraying himself as a journalist, was to show up in the courtroom. Hence, at the last hearing, the great judge, probably in order for that farce to look somewhat like a trial, at one point asked the empty-headed and ugly screw in the agitprop machinery of the little dictator: “And why don’t you call the plaintiff, so that you can check the information?”.

The answer was: “Well, BBC journalists don’t call Bin Laden… I was afraid to call”. He was released from responsibility, just as were previously the director and editor. That fearful and ugly scumbag on two feet and with a talent of speaking even more uglier, apologized in the courtroom, but not in the agitprop ridicule depicting itself as a media outlet. The plaintiff was not expecting anything better. And hence, everyone was happy and satisfied. Except the plaintiff. Hatred and lies remained to radiate in that media outlet and in many other such media outlets.

The story continues also in the time of the mentioned dictator’s rule and after him. They are left, the human moral waste, to carry out dirty tasks for a handful of dishonestly acquired silver coins that the criminal gang is throwing them, which is falsely presenting itself as a political elite.

Those scumbags have to be at the disposal of the criminals and thugs every day and every night. They are obedient adjutants of the evil. They are owned, they have nowhere to go. Everything in and around them is a lie. For them, reality is what they see inside, between the walls of their mental prison. They live inside the sculls of their bosses, they don’t live in the real world.

Their skills are limited, with little or no talent. They have to be producing, as if in a factory, and spreading fake news, disinformation, hate speech and encouraging violence. The best defence of that inhuman scumbag is for them to attack and say that someone is spreading fake news.

Semi-literate idiots, ugly and frustrated, with rotten souls and sick minds. Rotten to the core, but also frightened as night insects. They panically run away before even the slightest ray of light. Then, from the stinky holes of their souls, they extract poison in order to strike back at the attack, to poison the light, in order to return darkness.

Ordinary cowards and rotten souls. Rogues who poison the soul of all those who come in contact with them and with what they do. And it’s not the law, nor the court, nor the state that can stand in the way of that moral rubbish of people. Everyone alone can wipe them out, as poisonous steam on a window

CIVIL Conference: The Greens Are Coming!