DAILY BRIEF May 14, state of emergency, day 56: Protocol on election process prepared, SEC will listen to health authorities, Voters Register must be processed… 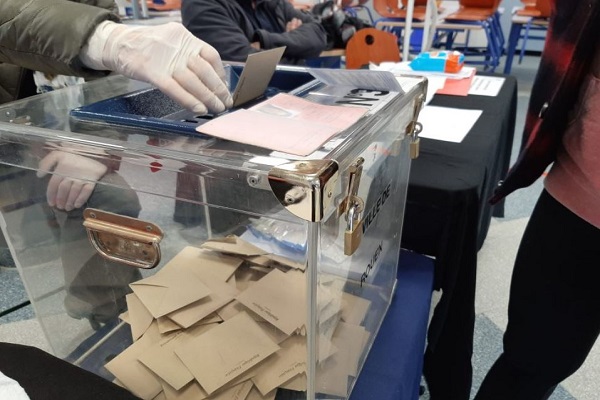 The Infectious Diseases Committee has prepared a Protocol for the entire election process, from the pre-election activities to the election day activities. Wearing a face mask will be mandatory, as well as keeping physical distance, frequent disinfection of hands and ventilation of premises.

Minister of Health Venko Filipce expects all political entities to respect the provisions of the Protocol.

“This protocol was unanimously supported by all members of the Infectious Diseases Committee and it must be fully implemented, without exceptions, in order to protect the health of the citizens. All leaders of political parties at the leaders’ meeting have said that the health of the citizens comes first and therefore I expect that all parties, their members and participants in the election process will respect this Protocol. The Protocol stems from the general recommendations for protection of citizens against COVID-19 that are currently in force and will remain in force in the following period as well” said Filipce at today’s press conference in the Government.

The Protocol, as Filipce said, has been made on the request of President Pendarovski, as a result of the conclusions from the last leaders’ meeting. The Protocol does not specify when the elections will be held, that is something that the leaders will determine at the meeting with the President.

On election day, all members of election boards and observers must wear protective equipment, sit in premises with open windows or frequently ventilate the premises. There have to be hand sanitizers at every polling station, while voters must keep a distance of 2 meters from each other and disinfect their hands before entering the polling station. They will need to remove their mask briefly for identification purposes, and after the voting again disinfect their hands.

There will never be more voters in the room than the number of polling booths. If possible, for which the SEC should be consulted, it is recommended for the time period for voting to be extended by two hours in order to avoid bigger crowds, said Filipce.

It is recommended that activities in the pre-election period be carried out by maintaining physical distance of 1.5 to 2 meters from others, mandatory wearing of protective masks over the mouth and nose and mandatory frequent washing of hands.

When organizing rallies, it is recommended that all these measures are respected, take into account the number of participants and use loud sound devices in order to avoid larger concentration of people in one place. The “door to door” campaign should be carried out with protective equipment and physical distance and by not entering in people’s homes, but only to their door or yard.

Party meetings should be organized outdoors if possible, and if organized indoors, the general recommendations for protection need to be respected and last no longer than two hours, after which the premises need to be ventilated. Mobile stands for advertising material should not have more than two activists at one stand, while transportation for political party related activities should be organized with means for public transportation with a maximum capacity of 50 percent. At the same time, wearing face masks is mandatory, while transportation providers must provide disinfectants.

The Protocol will be submitted to State President Stevo Pendarovski and to Prime Minister Oliver Spasovski.

STATEMENT OF THE DAY: Morning Briefing: CIVIL with intensified monitoring also in a time of a pandemic

In today’s program of “Morning Briefing”, Maja Ivanovska from CIVIL spoke about the latest activities of the organization in the context of the elections.

“Regardless of the current situation and the postponement of the elections due to the COVID-19 pandemic, CIVIL continued with its activities, which include long-term monitoring of elections. CIVIL has provided funds for engaging 220 observers. If until yesterday 19 long-term observers were engaged, already from today we have 24. The long-term monitoring is carried out according to the methodology that has been established since 2008, when we first started with monitoring of election processes in the country, and that methodology is continuously being developed and upgraded according to the changes taking place in our country, and there are many”, said Ivanovska for Morning Briefing.

Minister of Health Venko Filipce today stated that at the Security Council they will request a continuation of the State of emergency, but did not specify whether a continuation of 30 more days will be requested or less.

“Tomorrow a session of the Security Council is to take place. We will request a continuation of the state of emergency for several reasons, to have mechanisms in regards to the implementation of such recommendations also in the period that follows”, said Filipce replying to a journalist question at today’s press conference.

In the past 24 hours a total of 349 tests have been made, 29 new cases of COVID-19 have been confirmed. Most of them (nine) are in Skopje, six are in Prilep, five in Tetovo, two each in Struga, Veles, Bitola and Ohrid and one in Kumanovo. The Ministry of Health informs that today the Institute for Public Health has registered six recovered patients – three in Veles and one each in Stip, Gostivar and Kocani.

Minister of Health Venko Filipce at today’s press conference said that screening in kindergartens has officially started today. However, as he emphasized, there will be no decision for these institutions to open until they are sure that the employees are negative to the virus. He explained that the final preparations were made yesterday and that from today the kindergarten employees who will be tested have already been recruited.

A total of 42 people throughout the country have disobeyed the ban on movement in the past 24 hours, of which 37 have been detained and appropriate measures will follow for the others. As the MOI informed today, 25 people have violated the measure for mandatory wearing of protective equipment, that is, face masks.

The President of the State Election Commission (SEC), Oliver Derkoski, in an interview for “Morning Briefing” said that there have to be elections and that the SEC will adapt to the recommendations of the health committees. He also pointed to the need of processing the Voters Register again.

“We will receive the Voters Register, whenever the elections will take place, in the same form as we always receive it once we know the date for elections. We receive raw material, and the next day it is decrypted. That is why they say that 45 to 50 days are needed for this operation. I understand the politicians and their motives, but I have to respect the law. I, as President of the SEC, can be outvoted by the other members of the Commission, but the Voters Register is signed by all members of the Commission, and after it is signed, it is concluded and with that Voters Register we go to the elections. I will not sign such a Voters Register”, said Derkoski.

“Even from the beginning when the early elections were scheduled, I was against that, because I think that our country and our citizens are already tired of such intense election cycles. We are losing the sense of elections, that is, they are becoming a goal for themselves and not a tool for achieving a certain structure that would govern the country in a given moment, and the citizens are simply exhausted of having new and new elections all the time”, stated Professor Mirjana Najcevska in an interview with CIVIL Media.

“The European Council should have reached a consensus on the start of accession talks with Albania and North Macedonia long ago. It is in the interest of the EU as a whole, but especially in the interest of EU’s neighbouring countries in the region. It would be a mistake to ruin this success by politicizing on history”, stated in an interview for MIA German Ambassador Thomas Gerberich.