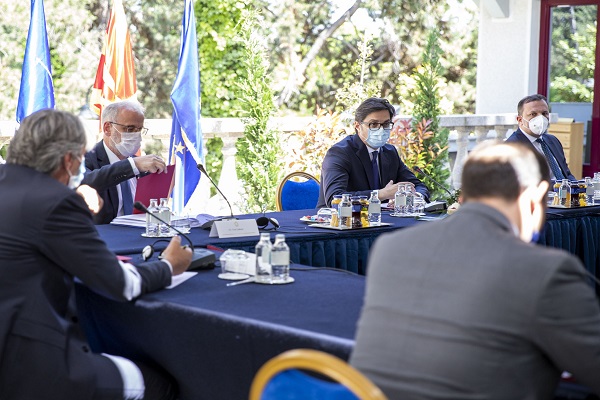 NEWS OF THE DAY: Leaders’ meeting, no agreement on date of elections

There was no agreement on a new date for parliamentary elections at this meeting, announced some of the leaders who participated in the meeting. It had been agreed to request from the Commission for Infectious Diseases and the State Election Commission (SEC) additional information on the possibility for organizing elections, along with information whether and when OSCE/ODIHR representatives could arrive to the country.

The main topic of the leaders’ meeting was the date for holding the early parliamentary elections that were scheduled for April 12, but were postponed by a Government Decree due to the state of emergency and the spread of COVID-19.

STATEMENT OF THE DAY: Filipce: Respect for the nurses who stood on the front lines against the coronavirus

Minister of Health Venko Filipce on his Facebook profile congratulated nurses on International Nurses Day and thanked them for their engagement, especially in the period of fighting the coronavirus.

“Nurses care about everyone around the world. Recently, their work has been even more difficult. We thank them for their effort and hard work. On International Nurses Day, we honour all those who stood on the front lines against the coronavirus”, wrote Filipce on Facebook.

Five patients have recovered in Skopje and Negotino. Ten new COVID-19 cases have been confirmed as follows: Skopje-6, Kumanovo-2, Prilep-1 and Veles-1. A 60-year-old patient from Delcevo died at the Clinic for Infectious Diseases, who also had malignant diseases. So far, the total number of COVID-19 diagnosed patients in the country is 1.674, 1.205 have recovered, 92 have died, and the number of active cases is 377.

Over the past 24 hours, 33 people across the country have disobeyed the ban on movement, 20 of them have been arrested and appropriate measures will be taken for the others.

In the past 24 hours, informs the MOI, 10 people across the country have been issued decisions for isolation and 72 people have signed statements for self-isolation.

The Constitutional Court of the Republic of North Macedonia at today’s session did not initiate a procedure for assessing the constitutionality of the second decision of President Stevo Pendarovski for declaring state of emergency, which expires on May 16.

This week to open and to put back into operation centers for education, training, seminars, organization of sessions and conferences, driver education centers, exam centers, outdoor exercise of individual sports, tennis, sports and other betting houses through a counter without the hospitality activity, and closed shopping malls without the hospitality activity, as well as centers for rehabilitation of hearing, speech and sound that have fully prepared their capacities.

According to the current situation, as was discussed at the meeting of the Commission for Infectious Diseases, in the following two months we expect a significant decrease in the spread of the coronavirus. We expect the high temperatures to contribute to this in the sense of weakening of the virus and a reduction in its transmission, said Minister of Health Venko Filipce at a press conference after explaining the draft plan on easing the restrictive measures that the Commission for Infectious Diseases submitted to the Government, which it will review today at a session.

For now, there is no strict recommendation to the Government to shorten the curfew, but the possibility has not been excluded to discuss this in the following period, having in consideration that gradual relaxation of the measures is recommended and more companies will start returning to work, said Minister of Health Venko Filipce at today’s press conference in the Government.

Ahead of us is a stable period where the epidemic is under control. The restrictive measures we took have given results and the health system is able to manage. The trend of decreasing cases continues, although in the past several days there were variations and an increased number of patients. It’s good that most of them are connected to two events, one in Tetovo and one in the surrounding area of Skopje, said Minister of Health Venko Filipce in a reply to a journalist question on whether there are conditions for elections to be held in June.

Minister of Health Venko Filipce expects all clinics and hospitals to start functioning normally in the next two weeks.

With the exhibition titled “Flowers of Humanity for Nurses”, Macedonian painter and humanist Zivko Popovski – Cvetin, the Red Cross of the Skopje and Lions District 132, marked International Nurses Day today.

Prime Minister Oliver Spasovski on his Facebook profile congratulated May 12 – International Nurses Day, expressing gratitude to the nurses in our country and throughout the world for their courage and dedication, because of which, as he pointed out, hope and optimism in the battle with COVID-19 became more real and achievable.

Today on International Nurses Day, we express our huge gratitude and support to the largest group of medical workers, who always on the front lines care for the health needs of individuals and communities, wrote SDSM leader Zoran Zaev on Facebook.

Payment of funds for January, February and March 2020 according to the Law on returning part of VAT to individuals has started.

The technical inspection of the bus of Durmo Tours company, which was part of the big traffic accident near the village of Lascarci, had not been realized according to standard procedures.

Between responsibility, concentration of power...