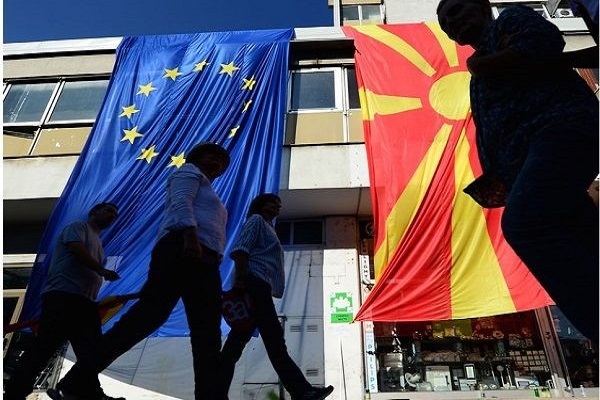 NEWS OF THE DAY: Historic news from Brussels – consensus has been reached, we are waiting for decision on negotiations on March 24

“In exceptionally complex conditions under which the EU institutions are functioning, under strong pressure of the challenges of tackling COVID-19, late last night, the body that is comprised of representatives of EU member states in Brussels, known as COREPER, has harmonized the first consensus – the conclusion for the start of negotiations with the Republic of North Macedonia”, stated Bujar Osmani, Deputy Prime Minister of Government in charge of Economic Affairs.

The conclusions will be on the next session of the EU General Affairs Council, added Osmani at the press conference where he presented the latest developments related to the country’s European integration process, as well as the activities of the Government in realizing cooperation with the EU institutions in tackling the COVID-19 epidemic.

“This is important news, not only as confirmation for our success, but also important news in these moments when we are also facing challenges of the epidemic caused by the COVID-19 virus. In addition to the threat to the public health, this epidemic is also a huge challenge for maintaining a decent economic activity and financial stability of the country. And as a candidate country for EU membership, and obviously soon, as negotiating country, we expect to be part of the package of measures, activities and protocols that currently are being prepared by the European Commission”, outlined Osmani, presenting some of the measures for cooperation and assistance from the EU, for which the Government addressed the European Commission with a letter.

Six new patients have been diagnosed with coronavirus today until 4.00 pm, informed Minister of Health Venko Filipce. Among them is a four-year-old girl from Stip who was infected in kindergarten in England. The family had returned to the country on March 14 and had been in home-isolation. They came to be tested yesterday, two days after the girl had felt the first symptoms. So far, a total of 48 people are infected with the coronavirus.

State of emergency does not mean the end of life. The rights and freedoms of citizens are not restricted automatically. Everything continues to function like yesterday. There are no new decisions for restrictions on movement. The municipalities of Debar and Centar Zhupa are an exception, said Technical Prime Minister Oliver Spasovski.

“As a government we are taking all measures for prevention and protection of citizens. The decisions are in the direction of doing as little as possible to harm the economy, the sustainability of companies and keeping the jobs of citizens. I assure you that we will get over this state of emergency in the best possible way, respecting all legal regulations for preventing the spread of coronavirus”, said Spasovski, emphasizing that any act of not complying to the measures will be strictly sanctioned.

“However, restrictions of freedoms and rights in no case can be discriminatory on the basis of sex, race, color, language, religion, national or social origin, property or social status”, said Deskoska.

“Until yesterday, the only additional engagement of the army was in the crisis regions of Debar and Centar Zhupa, where the Army fully took over the border with Albania, but after the state of emergency was introduced, the President signed a decision for engaging the Army in support of other institutions, primarily the police, and as of today we are already developing scenarios for much more intense presence of the Army. The operational headquarters are already working on plans if there is a need for them to assist the police in performing regular controls”, said the Minister of Defence, Radmila Sekerinska.

In the Demir Kapija facility, which is located in the village of Ergele, there are currently 11 people placed there in need of isolation, in accordance to the measures for prevention and protection against the spread of COVID-19, announced today the Minister of Labor and Social Policy.

“All conditions for the people staying there are provided, hygiene products are regularly provided, meals are distributed packed in individual portions, and health care is provided by mobile health teams. Additionally, the facility is disinfected on a daily basis”, is said in the statement.

A total of 24 criminal charges have so far been filed against 29 people who have violated the measures for preventing the spread of COVID-19, informed the MOI. A smaller part of them based on Article 205 of the Criminal Code of the RNM – “Transmitting an infectious disease”, and most of them based on Article 206 – “Not acting according to health regulations during an epidemic”.

Among the reported is also the recently dismissed Director of the Skin Disease Clinic in Skopje, who, after being in Italy, went to work for an entire week and also participated in a symposium with more than 100 other doctors. After having developed COVID-19 symptoms, the director called the Infectious Clinic, where it was confirmed that she was infected with the virus, after which the Skopje Skin Disease Clinic and the Stip Unit for skin disease were closed and 193 people were put in quarantine.

As of today, new six million euros are available to companies for interest-free loans for overcoming the situation caused by the coronavirus and for protecting the liquidity and jobs, and soon about 100 million euros will be available as an intervention set of measures to the economy for that purpose, stated today the Minister of Finance, Nina Angelovska.

STATEMENT OF THE DAY: Stojanovic: They kept me in a drawer for 11 years

State Election Commission at today’s 65th session, determined the order of candidate lists on the ballot for election of MPs in Parliament. The parties will carry the following ordinal numbers:

The SEC outlined that this is their legal obligation and that they will work until it is decided otherwise. The President of the SEC, Oliver Derkoski, informed that due to the declared state of emergency by the President of the State for tackling the COVID-19 pandemic, the Government will have to bring certain decisions.

There are high prospects and positive signals from a huge majority of EU member states, however, the debate is not completed to the end. COREPER is not a body that makes political decisions. Currently, there is still a debate in the EU on how to hold the General Affairs Council on the 24th, stated Minister of Foreign Affairs Nikola Dimitrov at the virtual online press conference with German Minister of State for Europe Michael Roth.

“Belgium “locked” its country yesterday and it is very difficult for any of the ministers of the member states to attend the Council on March 24th in Brussels. Lawyers are debating if it can be held via a video connection and I hope that here a right decision will be made. I think that the EU will make a big mistake if it sends a signal that it is so overwhelmed with the health crisis that it cannot do anything else. And it will be very important after so much work and effort when we are a step away from that joint success, to find a way to hold March 24th for us, for the Macedonian people”, said Dimitrov.

“In the Council of Ministers we spoke about that. I have the impression that many of the member states agree. At the moment I do not see anyone blocking the new methodology. The current crisis is making us creative. We are advocating here in Berlin about that and the Council should take advantage of the online possibilities of digitalization. I can agree with Dimitrov, precisely in such time the EU should show that we can act and make decisions, especially in regards to the enlargement”, said Roth.