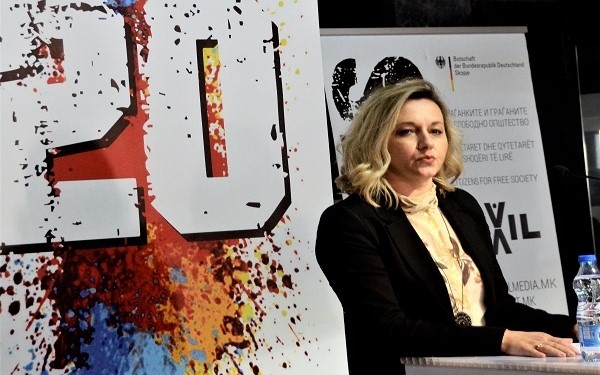 Fani Karanfilova Panovska, from the Foundation Open Society Macedonia, at the Conference “Between Hopes and Reality”, as part of CIVIL’s 20th anniversary celebration, highlighted the importance of solidarity between civil society organizations, the achievements and challenges.

“CIVIL is one of those partners that with the Foundation, not only grantors but also partners in many struggles and fights, has survived or together have won or lost and have quite a long cooperation, exactly 20 years.

I was thinking about the topic “Between Hopes and Reality” and here on the list of hopes in regards to civil society there were many things, also on the list of reality, that is why I will move on to the achievements, challenges and perspectives.

Civil society as a whole, not only the non-governmental organizations, in the past 20 years has shown serious maturity, agility and dedication in what is its autochthonous mission and vision, and has shown this in several key and critical development points of our country.

I will start with the seriousness, the voice and reason during the crisis in 2001. During the entire struggle, the only, if not single, rare voice during the regime in the 11 years. As a main supporting pillar in destroying everything that meant corrupt and undemocratic rule. As an actor who was state enemy number one and as such persecuted and persecuted because of being someone who managed to impose himself as desired and equal to the government in creating policies.

I come to the challenges, because this is where we have arrived to with the achievements. It is true that these past two years have been very different from the previous 11 years. This certainly had an influence on civil society organizations. The key challenge that civil society organizations faced was with the institutions opening their doors and their invitation, to really participate and actively in the process of creating policies. They had to make a shift from what it meant to fight, advocate and represent on the streets, which lasted quite long, to sitting at the table with the institutions and knowledge needed to discuss from that perspective.

I don’t say we don’t have them, we do have them, we managed to impose ourselves, that is one of the achievements. I would say that about twenty key legal and strategic documents have been innovated with solutions and efforts of civil society organizations. The Law on anticorruption, on antidiscrimination, free access to public information, the strategies for reforms in the judiciary… yes, you will say these are strategic documents, glossy papers, but if you look at the content, you will see that it reflects what we have been fighting for in these past 15 years, and I consider this as exceptional success.

When I think about when we were the strongest and most united, it is practically when it was most difficult for us. When we were uncertain how we would wake up the next morning. Whether in our home or someplace else. It was then that spite, rebelliousness and solidarity, regardless of the differences on various grounds, were greatest.

I now ask myself, do we need a new, such threat for us to find the strength to provide such mobilizations and solidarity?”.

RAMP - Panel discussion on the un(acceptance) of...

Krzalovski: What impresses me about CIVIL is the...