Categories
Home Newsroom Jovanovic: Let’s return economic policies that work for the citizens, not the oligarchs

OPINION Jovanovic: Let’s return economic policies that work for the citizens, not the oligarchs 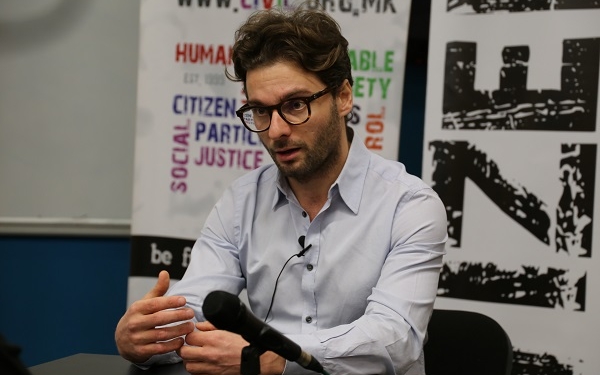 CIVIL Media spoke with Branimir Jovanovic about how 2019 was at the political and social level, and about what in his opinion are the perspectives for 2020. Jovanovic says that at the beginning the Government worked well, but that in 2019 it made a big step backwards.

Jovanovic stated that the Government disappointed in 2019 due to three main issues. The first reason according to him is the “Racket” affair, which he says exposes all the weaknesses in the judicial system.

“That is actually the most upsetting thing about the “Racket” case, that it shows that the government hasn’t done almost anything for the biggest problem that we have been stressing for the past five years. The second concern is the negative outcome of the foreign policy, that is, the EU integrations. This is probably not our fault, we did our part, but the EU simply didn’t deliver. I agree with that, but I think that the failure with the EU integration shows another thing, and that is that the Government in the past two and a half years was entirely focused on the foreign policy and did very little to solve the domestic problems that were more serious than the foreign policy”, says Jovanovic.

As a third reason he indicated the reversal in the economic policies that took place in 2019.

“A reversal with the change of previous Minister of Finance Tevdovski, with the appointment of his replacement Angelovska and the termination or freezing of the progressive tax. This is worrying, because with all those measures it’s as if the Government has shown that it’s still in the hands of the oligarchs, as almost all the governments have been in the past 30 years in this state”, added Jovanovic.

According to Jovanovic, the priorities for 2020 should be precisely solving these three major problems.

“It’s clear to me that everything cannot be changed overnight and that time is needed, but what I want to see is not results, but determination for those problems to be solved”, he says.

As to the EU integrations, he says that the state should work more on the domestic problems, such as the functioning of the institutions, education, reforms in health care, pollution measures and others.

“I want to see returning to the path of economic policies that work for the benefit of citizens, workers, the poor, exploited, oppressed, and not policies that suit the oligarchs, the powerful, the big companies and business community”, says Jovanovic.

Hajredini: Regardless of the results, the...