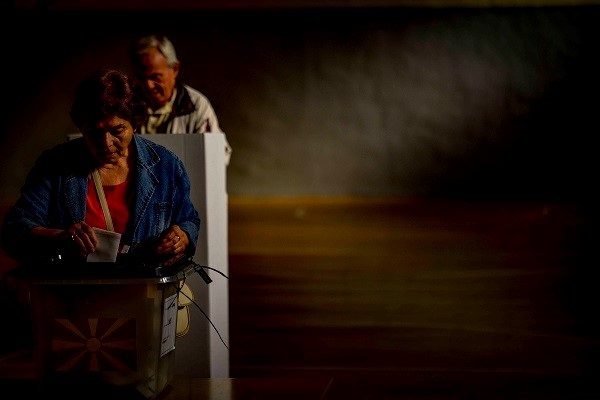 Notes from the day of the Referendum voting, September 30, 2018: The poor Voters Register, but also the inefficient administration led to absurdity on the day of the voting, as CIVIL has been warning for years. This report of journalist Arben Zekjiri is an exceptional illustration of how the right to vote has been violated, due to the poor Voters Register and the equally poor treatment of voters who try to exercise their right.

More than 100 citizens complained that they did not figure on the Voters Register on the day of the referendum, in the Municipality of Tetovo alone. The branch office of the State Election Commission officially confirmed that until 3.00pm around 100 voters had complained to them that they are not on the Voters Register. However, this number is not final, because, CIVIL’s observers, even after 3.00 pm, keep receiving additional information on people who are not found in the Voters Register, so the real number of “missing” voters is surely much greater.

Many have complained to CIVIL’s observers that they are not on the Voters Register, but that they do not intend to complain, because people they know and their relatives told them that it’s useless and that they cannot finish the job. During our visit to the SEC branch office in Tetovo, we also received confirmation that there is simply no solution for this situation.

CIVIL’s warnings that the Voters Register is in a poor condition have shown to be realistic as early as the morning hours, when the first problems in terms of finding voters appeared in several polling stations in Tetovo. Several voters stated that at the previous elections they had voted at one polling station, whereas at the referendum they had been transferred to another polling station. Some complained that they could not be found anywhere in the Voters Register.

At polling station 1929, citizen Safije Zekjiri had been deleted from the Voters Register, and claims that another neighbor had concluded the same problem at that polling station. On Street 110, number 58, where Safije Zekjiri lives, another name and last name figure on the Voters Register, Lumbard Krasnici. This person figures there from the previous parliamentary elections (2016). Nobody knows him, he does not live at that address and is not part of that family.

During our visit in the building of the Municipality of Tetovo, we met with two citizens who complained that they are not on the Voters Register, and that after another voter had informed them they could not exercise their right to vote, they got irritated and did not even try to request assistance from the competent bodies.

Following these meetings with the discontent citizens whose right to right had been denied, we addressed the branch office of the State Election Commission in order to receive accurate information and to ask about the manner of returning the voters in the Voters Register.

A responsible person named Arben Fejzuli in the office of the SEC in Tetovo, told us that they do not have accurate date, as all the citizens who had complained had complained in words, and they themselves do not have a system for recording or processing the data. At the same time, he informed us that around 10 people had complained until 3.00 pm that they are not on the Voters Register. However, we contacted or received information of additional twenty people during the afternoon, after 3.00 pm, who had tried, but had not succeeded to exercise their right to vote at the referendum.

Hence, we found out about two new cases of problems with the Voters Register at the moment we were exiting the office of the SEC in Tetovo. Namely, two people came to complain that they are not on the Voters Register, although they had obtained ID cards on July 30, 2018. Their problem was not solved, even though he tried to receive assistance from the “headquarters” in Skopje.

As soon as this episode ended, another citizen entered the office who complained that she was not on the Voters Register. She requested a written document with which the office of the SEC would confirm that it had received a complaint and that it would process the case. A responsible person recommended the citizen for her to address the “headquarters” of the SEC in Skopje or to write a written complaint that would be copied and sent to Skopje. “It will not arrive in Skopje, but  instead you will throw it in the garbage”, replied the citizen revolted and left.

The institutions have to protect, and not violate...

The SEC “couldn’t care less” about the...