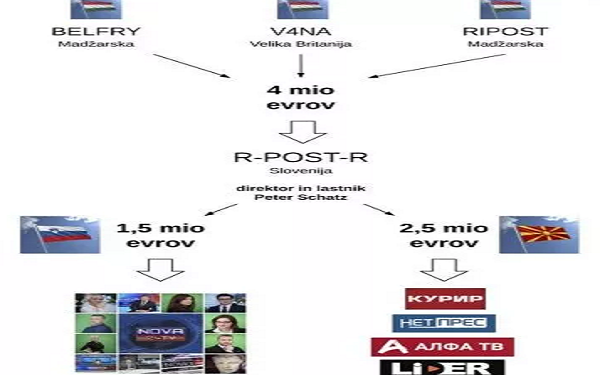 NEWS OF THE DAY: Hungarian-Slovenian political-intelligence operation for overturning the Prespa Agreement

At least four million euros, since August 2018, for financing media such as the Slovenian right-wing SDS and for political-intelligence-media operation aimed at destroying North Macedonia’s accession to NATO, have arrived in Slovenia from accounts and companies of members of the narrow circle of Viktor Orban, opened in London, writes necenzurirano.si.

The Slovenian portal published that their editorial office had received documents, data and information from several countries. From those documents, as the portal writes, it can be seen that at least three companies, tightly connected to the Hungarian ruling party Fidesz, have realized at least four million euros in one phase of operation since August 2018, of which –  1.5 million euros from transfers from Hungarian sources remain in Slovenia, while the other 2.5 million went to Macedonia.

The data show that suspicious Hungarian money had been sent to Macedonia through Slovenia. Hungarian media owners within the Slovenian SDS circle used this to buy and finance media that favour VMRO-DPMNE. Actually, it is a matter of financing a political activity in Macedonia, writes “necenzurirano.si”.

FLASH: Instead of answers – spins

News comes from a Slovenian portal that the Hungarian government of Orban had been sending money through Ljubljana to media in Macedonia close to VMRO-DPMNE, money that had actually been intended for financing a political activity in the country, and at a time when negotiations had been taking place for the Prespa Agreement. Instead of answers, we received fleeing and spins…

Najcevska: We definitely need a new Law on PPO, but not in this way

TOPIC OF THE WEEK: Hybrid threats to democracy

In the midst of the newest scandal with the allegations on the Slovenian portal that today presented serious indications about involvement of Hungary and Slovenia in a propaganda against the Prespa Agreement, the topic of fake news, black propaganda and hate speech once again is imposed.

Precisely because of this, CIVIL is organizing a panel discussion on Thursday titled “Hybrid threats to democracy”, where we will discuss these incidences and processes as a huge threat to the country’s democracy.

POLITICALLY OK CORRAL: And justice for all…

Political-intelligence-media scandal, bargaining over the Law on PPO and the already regular quarrels of the technical government have marked the day.

This weekend CIVIL held a seminar in Strumica on transparent and responsible political processes, where citizens of the South-Eastern region took part.

Currently, a commission is being formed that will be reviewing the applications for long-term observers. Applying for short-term observers is still ongoing. Apply HERE.

On the type of politician according to DUI’s measures and how this party understands the concepts of democracy and pluralism, writes Arben Taraveri in his column “Gargamel, go away!”.

On the parliamentary elections, political party offers and the expectation of voters, writes Zoran Ivanov in today’s column – With boring party programs or with authoritative non-partisan cadre”.

“A referendum campaign, in the Macedonian media space had been financed with non-transparent foreign money, transferred from one firm to another through several countries. Two and a half million euros for spreading anti-referendum ‘aluminium’, fake news and misinformation”, writes Petrit Saracini in today’s column ‘Financing the anti-referendum campaign with money from other countries is a crime and violation of several system laws!”.

“Has someone been spending millions of euros to attack state interests, who and how much? What kind of answers did we get from the questions asked? More on this in Xhabir Deralla’s Burst.