Categories
Home Newsroom CIVIL: Hiding behind the party podium and blackmail are unacceptable, Mickoski has to be held responsible!

STATEMENT CIVIL: Hiding behind the party podium and blackmail are unacceptable, Mickoski has to be held responsible! 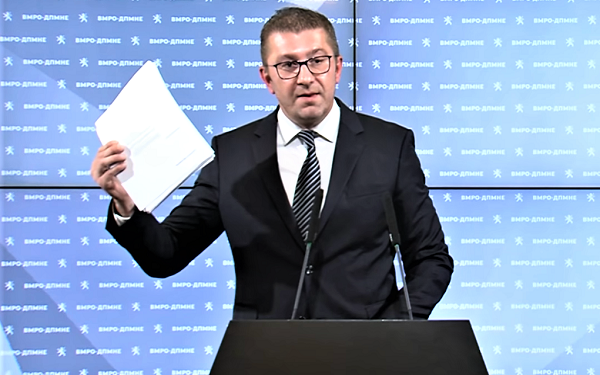 CIVIL expresses deep concern and demands from the institutions to respond decisively, timely and according to the laws, following the public recognition of VMRO-DPMNE leader Hristijan Mickoski that he holds documents that are part of a criminal investigation. As the Prosecutor’s Office itself emphasized, those documents have been obtained in a criminal manner.

It is unacceptable to abuse the law on whistle-blowers, and anyone who wishes to gain any advantage or wishes to blackmail with the possession of secret documents from a criminal investigation, has to face the full force of the law.

By hiding behind whistle-blowers, with the purpose of conducting political abuse and blackmail, he is making irretrievable damage to the efforts for combatting corruption and abuse. Mickoski’s action should be condemned by the public, but there should also be a response from the investigative and judicial authorities of the system. CIVIL expects for the investigation to determine where those materials are being hidden and what other materials are being hidden in the headquarters of VMRO-DPMNE, which is property that has been frozen upon the request of the SPO.

“The citizens are concerned with how the institutions are functioning, but also with how the centers of power and political parties are acting. The law has to apply to everyone, therefore, also to political leaders. They have to be an example of how institutions are supported and respected and contribute to the rule of law, and not trample on all the benefits of a democratic society. The behaviour of some political subjects and leaders in the country is extremely irresponsible and unlawful. They have to be held responsible!”, stated Xhabir Deralla, CIVIL.

CIVIL is loudly protesting such behaviour of certain politicians. Gruevski’s regime has to finally fall and conditions have to be provided for everyone to be equal before the law, regardless of the social status and wealth that individuals possess. The public and institutions must not be hostages to the impunity of individuals who from a party podium or from positions of financial power undermine the rule of law, and thus hinder justice and violate human rights and freedoms.

There has to be responsibility!